Sgt. Gonzalo Castro, a Marine Corps recruiter based in California, was arrested on July 28 after a 17-year-old girl alleged... 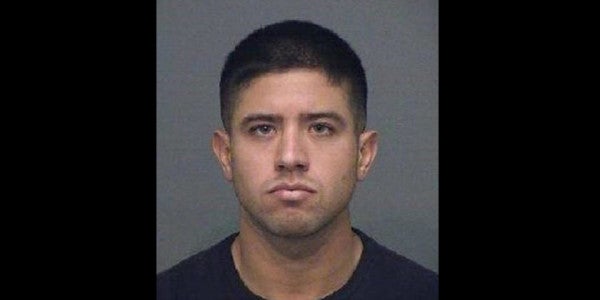 Sgt. Gonzalo Castro, a Marine Corps recruiter based in California, was arrested on July 28 after a 17-year-old girl alleged that he sexually assaulted her.

The student, who lives in Huntington Beach, went to the police in June, suggesting that a male recruiter and high school volunteer sexually assaulted her during the 2016-2017 school year, the LA Times reported.

Castro had been working as a recruiter at Ocean View and Marina high schools, and volunteered as a track and field coach at Marina, where the girl attended school.

The girl, who has not been identified, told police that she met the Castro when he volunteered with her high school’s track team. She claims that he sexually assaulted her during a training run that occurred off-campus.

Castro was taken into custody on suspicion of sexual assault, but was released on bond, authorities told the LA Times.

“This is an isolated incident and is not indicative of Marines as a whole,” Capt. Chad Hill, deputy marketing and public affairs officer for the 12th Marine Corps District, told LA Times. “We take this seriously, and this is not what the Marine Corps is about.”

Castro’s case isn’t the first issue of sexual misconduct by a recruiter, however. Just a month ago, the Wisconsin state court of appeals upheld a ruling that former Wisconsin Army National Guardsman Jesse Riemer was adequately punished by the military with a dishonorable discharge for soliciting sex from potential enlistees while working as a recruiter between 2012 and 2014. And in March 2016, an Illinois recruiter — Luis Fernando Maya — admitted to having sex with a 15-year-old girl he planned to recruit into the Marine Corps; he currently faces felony charges in the state.

Task & Purpose reached out to the Marine Corps and Protect Our Defenders, and we will update this story as more information becomes available.