The Problem With ‘Let Marines Be Marines’

Proceedings, the monthly magazine of the U.S. Naval Institute founded in 1874, stands among Scientific American, The Atlantic, and Harper’s... 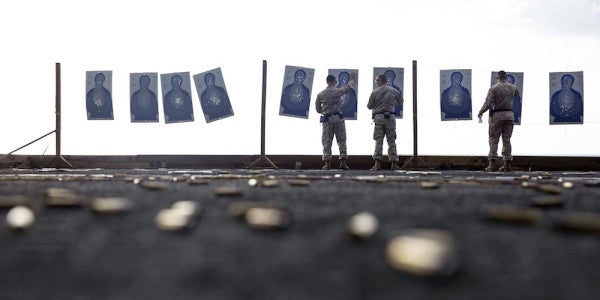 Proceedings, the monthly magazine of the U.S. Naval Institute founded in 1874, stands among Scientific American, The Atlantic, and Harper’s as one of the nation’s oldest continuously published magazines. But despite its prestige, it is occasionally the home of some terrible “think pieces.”

In the latest issue, for example, Marine aviator Capt. Brendan Boley lays out his simple strategy for solving the Corps’ growing retentiondeficit: Instead of investing in solutions like online training and reenlistment bonuses, simply “let Marines be Marines.”

Sounds great! Where’s the rub? Well, it’s all in how you define being a Marine.

Excessive training and sign-offs annoy practically everyone in the military establishment — even Defense Secretary James Mattis, who last summer directed the services to look for ways to lighten their non-operational training and administrative demands on service members. But in a Corps wracked by Class A aviation mishaps, misogyny, and revenge-porn scandals, it’s fair to ask which wastes more time and energy: training Marines to do better, or letting this state of affairs continue.

Take sexual assault: An estimated 20% of reported assaults in the Corps involved an assailant who had also committed an assault before joining the service, according to the DoD’s report on sexual assault in the armed forces during fiscal year 2016. In a year in which the Pentagon registered a record number of sexual assault complaints, the Marines’ rate of repeat offending was rate twice that of all the other services.

Even before the spike in reports, a Rand Corporation study found that nearly 8% of women in the Marine Corps were sexually assaulted in 2013, far outstripping the other branches; after the “Marines United” nude-photo-sharing scandal broke in March, Marine vet Kate Hendricks Thomas recalled for Task & Purpose readers just how prevalent sexual harassment and assault were during the early years of the Global War on Terror.

The problem with “let Marines be Marines,” as Boley means it, is that it thinks of culture as a matter of readiness — but doesn’t appear to see sexism and assault as obstacles to readiness. “The flight of talent directly impacts operational readiness, safety, and combat effectiveness,” writes Boley. “More money may help, but any solution must include a culture that focuses on combat effectiveness, the time and money for realistic training, and a focus on individual Marines as valued investments and not a replaceable commodity.”

That culture is currently lacking. Indeed, it’s the current culture of the Marines that led to the distribution of thousands of explicit photos of female service members, veterans and civilians — often taken without the subject's knowledge — on the “Marines United” Facebook page. It’s the culture that enabled 35-year decorated officer Col. Daniel Wilson to rise through the ranks while sexually abusing a subordinate’s twin daughters. It’s the culture that, once he was exposed and charged, offered accommodations based on his stature in the Corps. Wilson isn’t alone: general and special court-martial disposition overviews published by Headquarters Marine Corps in June indicated that 18% of judicial proceedings involved the sexual abuse of a child or child pornography-related offenses in the first six months of 2017 alone. One Marine sergeant allegedly used his position as a recruiter to sexually assault a teenage girl — not a proud moment for the few and the proud.

Boley (along with plenty of other capable, war-tested Marines) appears not to understand that sexual abuse awareness training is about more than just operational readiness. While Commandant Gen. Robert Neller and Sgt. Maj. of the Marine Corps Ronald L. Green decry sexual harassment and abuse as antithetical to the Marine Corps’ ethos and unit cohesion, they can’t directly intervene in the banter of the barracks and stamp out detrimental behavior. Sexual harassment and abuse training isn’t just about reminding service members that revenge porn and aggressive comments are bad news; it’s about encouraging individual Marines to intervene, spot-correct, make a report: to do something about problem behavior that they see.

Related: A Disturbing Portion Of Marine Corps’ Courts-Martial In 2017 Were For Child Sexual Abuse »

Consider Kate Hendricks Thomas, that vet who wrote of her ordeals with harassment for Task & Purpose. She was a Marine’s Marine: Her last active-duty billet was as commander of the all-female 4th Recruit Training Battalion at Parris Island. But she recalled for T&P; readers how she carried spray paint in her gear while deployed in Fallujah to “cover increasingly detailed and explicit drawings of me that decorated every porta john” in the city.

“I laughed at the time and gave the ‘artists’ points for creative positioning,” she wrote. “I was 25 and confident and refused to recognize the comments as harassment. I could have facilitated an honest and frank discussion with my young recruits who would potentially see that and much worse, and I did not. In that way, I’m complicit.”

“Let Marines be Marines” isn’t a misguided ideal. Theirs is the proudest service with good reason, embodied in that hymn: “First to fight for right and freedom, and to keep our honor clean.” But until the DoD recognizes that vague invocations of “honor” and “duty” from high-ranking branch officials aren’t enough to stem the rising tide of misogyny in the armed forces, “let Marines be Marines” will remain part of the problem rather than a solution.