The U.S. military has a problem with women. Whether it’s sexual assault, subtle discrimination, or misogyny, female service members have... 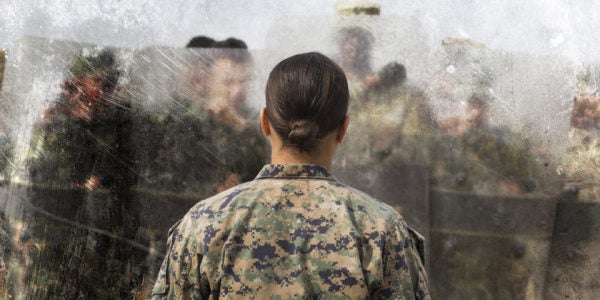 The U.S. military has a problem with women. Whether it’s sexual assault, subtle discrimination, or misogyny, female service members have waited long enough for the notoriously bureaucratic Department of Defense to fix itself. The Marine Corps, however, is America’s 911 force—its smallest, fastest, most lethal service—with a culture that affords it unique flexibility. As such, it should conduct a complete gender integration to unravel inequality and preempt disruptions that hinder its mission.

In December 2015, Defense Secretary Ash Carter mandated that women would be eligible to serve in all combat jobs. Since then, the #MeToo movement took off but the various branches are still struggling to integrate and provide equality for females in a traditionally male-dominated culture. The Marine Corps conducted a year-long study into the issue, finding that all-male units outperformed mixed gender units across the board. Further complicating the issue, President Trump recently banned transgender citizens from service and the Pentagon’s 2017 Annual Report on Sexual Assault indicates that attacks are on the rise. These issues are not insurmountable, but we need a different culture and mindset.

America must keep two preeminent concerns in mind when facing these challenges. First, what purpose does our military serve? Second, what greater American values does the military represent? The most first and most basic purpose of the Marine Corps “is to locate, close with and destroy the enemy by fire and maneuver[.]” While it has other secondary commitments, everyone’s primary goal should be prioritizing mission readiness for combat and peacekeeping missions. With regards to the values embodied by the persevering American Dream, the military should provide equal opportunities and access to all. Results may vary.

The Corps, while not immune from some of the racial and discriminatory issues facing the nation, generally sees its members as only one thing: Marines. Everyone is equal from the first day on the yellow footprints (or as our Drill Instructors used to say, “a complete and utter piece of shit”). Every Marine is a rifleman first and foremost; tasked with defending our nation and judged only by one’s effectiveness at doing so. To the Marines, personal attributes or preferences always take a backseat to the needs of the Corps.

Accordingly, the Corps is perfectly positioned to lead the way in total gender integration. First, it should eliminate all recognition of gender or sex outside of medical treatment. No longer recognizing male or female, transgender or cisgender, all Marines would simply be Marines. Second, in addition to the Corps-wide Physical Fitness Test, it should also adopt a uniform physical fitness regulation according to a Marine’s Occupational Specialty. Although administrative Marines would be subjected to less stringent requirements for their occupation-specific test than infantry Marines, the standards across each occupation would be the same regardless of gender.

“The Corps, while not immune from some of the racial and discriminatory issues facing the nation, generally sees its members as only one thing: Marines.”

Through such a change, the Marines would preemptively eliminate tackling divisive social or political conversations about gender fluidity, bias, or women in combat. Moving forward, all that remains is one question: can a Marine physically meet the standard? And instead of arbitrarily creating physical fitness requirements, the Marine Corps should base standards on actual job duties and effectiveness. If someone cannot carry a 60-pound pack on a 22-mile march, they cannot meet the infantry’s necessary physical requirements.

In addition to refocusing the Corps’ personnel recruitment and retention policies to mission accomplishment, a genderless-Marine Corps would have other inherent benefits. While integrating recruit training may seem problematic, with all recruits forced to train, shit, and live together, the Corps could use the opportunity to reinforce its values and root out discriminatory mindsets. Imagine the havoc a Drill Instructor would reap on the first recruit to cast a wandering eye. When a male recruit is trained from day one that the female next to him is a coequal family member, he knows that bigoted mindsets will not be tolerated.

Male Marine recruits also would be exposed earlier to powerful and intimidating female Drill Instructors, replacing the previously all-male leadership in favor of integrated roles that instill respect for the title “Marine” above all else. Desexualization and increased empathy would seemingly improve current stagnant efforts to combat sexual assault. Complete integration also tackles promotion equity problems identified by female Marines, who may feel that lower expectations and lack of access to combat leadership roles have traditionally stymied career progress.

A policy change of this magnitude would obviously necessitate an enormous culture and organizational shift, at a time when the Marine Corps is already consumed by The Long War. As America’s elite fighting force, the Corps should jump at the chance to offer an equal opportunity for all Americans. All may try, few will succeed. No longer held back by gender inequality or the instability of the social or political landscape, our Corps can continue to excel in its primary mission: swiftly winning our nation’s battles in times of crisis.

Mariko & Caesar Kalinowski IV are combat veterans of the Marine Corps, with a combined four deployments over fourteen years in missions around the world. They met at their local VFW on the Marine Corps Birthday a decade ago, and recently welcomed Caesar V.