Corps to Marines: Would a small black umbrella make you happy?

The Corps wants to know: would you like to use a f*cking umbrella when it's raining? 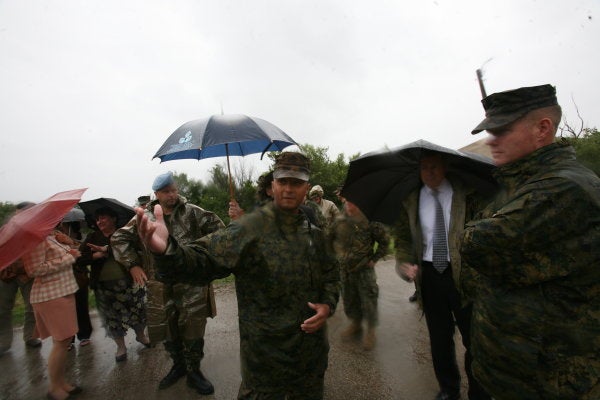 The Marine Corps is looking for input from active duty and reserve Marines on their most burning questions related to uniform policy through an online survey opened Monday, most notably asking whether they can finally use a fucking umbrella when it's raining.

Officers and senior enlisted leaders on the Marine Corps Uniform Board are currently debating such hot topics, which will eventually make their way into the one regulation just about every Marine trying to get their slightly out-of-regs haircut past their first sergeant knows — Marine Corps Order P1020.34H.

At this phase in the game, the board is asking for feedback before developing recommendations, which the commandant will ultimately sign off on. Among the questions the board wants to get feedback on are whether both male and female Marines should be allowed to use a small black umbrella while in uniform (currently only female Marines can do so, for some reason).

Right now, male Marines are required to walk around base in uniform getting soaking wet so they can show America's enemies what lethality really looks like.

Also asked in the survey is whether Marines in the rank of lance corporal and below should get the same gold belt buckle with an Eagle, Globe, and Anchor that non-commissioned officers wear in dress blue uniform; whether female Marines should be authorized silver earrings in service uniform; and whether hairstyle regulations for Marines in utilities should be the same as when they are in physical training uniform.

The board is also asking whether clarifying language be “added to current regulations regarding ponytails during physical training for females with medium length hair,” according to a Corps press release.

The survey is open to CAC holders until April 29, where Marines can approve changes, maintain the status quo, or skip the proposals. You can find the survey here.