"Marines can carry an all-black, plan, standard or collapsible umbrella at their option during inclement weather with the service and dress uniforms." 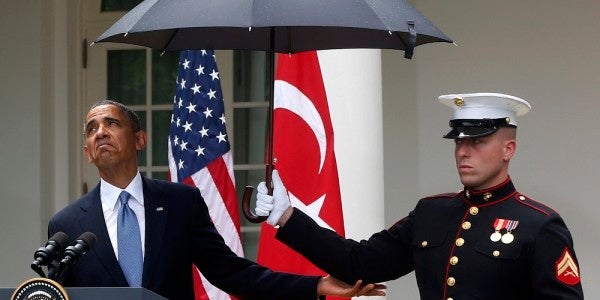 Repeat after me Marines: This is my umbrella! There are many like it, but this one is mine!

That's right. In an event that rivals the Marine Corps' founding on Nov. 10. 1775 in terms of significance, Corps officials have announced that all Marines may now shield themselves from the rain under the latest changes to uniform regulations.

“Marines can carry an all-black, plan, standard or collapsible umbrella at their option during inclement weather with the service and dress uniforms,” according to a new All Marine Corps message, which is expected to be posted by tomorrow evening.

Until now, only female Marines had been allowed to use umbrellas while wearing the service or dress uniform.

The revised umbrella policy is just one of the decisions made by the Marine Corps Uniform Board in September. Another major change is that female Marines can now wear gold or silver ball earrings with their service and dress uniforms.

As with all matters regarding uniforms, Marine Corps Commandant Gen. David Berger made the decision to finally allow Marines to use umbrellas, said Mary Boyt, the uniform board's program manager.

“The option to authorize the use of umbrellas when in uniform has been presented to previous commandants,” Boyt told Task & Purpose. “However it has only recently been approved by Gen. Berger.”

Soldiers, sailors, and airmen are already allowed to carry umbrellas in certain conditions. Since Marines are famous for getting drenched whenever they are outside, the Corps' umbrella announcement has added meaning.

Alas, Marines cannot use umbrellas while in their camouflage uniforms, so Devil Dogs will continue to get soaking wet every time they are in the field for training or operations.

As previously mentioned, the uniform board has made several other changes about what Marines can wear, such as earrings.

In typical Marine Corps fashion, the Corps message goes into minute detail about what earrings are acceptable: “Small, polished, yellow gold or silver colored, ball, or round stud earrings (post, screw-on, or clip), not to exceed 6 millimeters (about 1/4 inch) in diameter, may be worn with the service, blue dress, and blue-white dress.”

The message delves even further into the minutiae about when and how female Marines can wear half ponytails during PT, promising a new graphic on the matter is forthcoming.