Just as the Department of the Navy is trying to increase recruitment and retention of women to the Navy and... 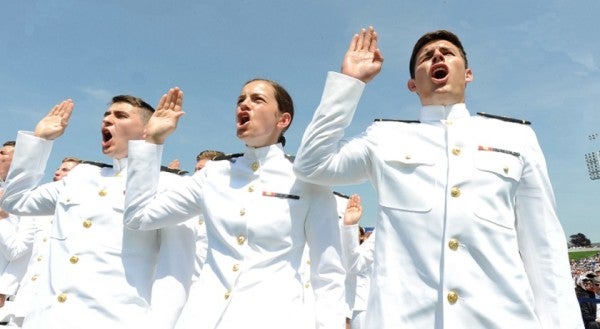 Just as the Department of the Navy is trying to increase recruitment and retention of women to the Navy and Marine Corps, its leadership is taking deliberate steps to ensure that women become invisible in the ranks by forcing them to wear masculine dress uniforms.

Secretary of the Navy Ray Mabus has championed women’s equality in the sea services, leading the charge for women to be integrated into combat roles in the Navy and Marine Corps. On this one point, he has been far off base. In October 2015, he stated, “In the Navy and in the Marine Corps, we are moving towards uniforms that don't divide us as male or female, but rather unite us as sailors or Marines.”

Vice Adm. Robert P. Burke, chief of naval personnel, parroted this sentiment on June 15 to an audience of women service members at the Joint Women’s Leadership Symposium. He suggested that the $350 off-the-shelf price (excluding tailoring and the cost of replacing a serviceable uniform) isn’t that much money to ask only female officers to pay out of pocket. Male sailors are completely unaffected, and female chiefs and sailors will receive a stipend to cover the purchase cost.

While likely not their intentions, it seems like these two men are telling women that they know better than the thousands of women their decisions actually affect. Discussions in online forums for female leaders in the Navy suggest that the Naval Academy wear tests were overwhelmingly against the changes. One of my own previous articles discussing how the uniform changes are discriminatory was followed by female Navy officers writing to Congress. Congress responded by halting the changes in the latest draft of the NDAA for fiscal year 2017, which has already passed the Senate.

“A lot of us have wondered how the cover and chokers were pushed through so quickly, and then when we ask about our khaki pants, we are told that that will take time to go through the process,” a female commander told Navy Times in an April 2016 article.

There is a major factor that these Navy leaders just don’t understand, no matter how well-meaning their intentions: Visible representation matters. In this case, people need to clearly see women in uniform in order to understand that women can and do serve in the military. Mabus and Burke are both older white men, a demographic visibly represented among peers, senior leaders, members of elected office, and on television. For them, the concept of underrepresentation is a tough phenomenon to understand because it’s never been a concern for them.

On the 350-mile drive from San Diego to Las Vegas, you pass a Marine Corps recruitment billboard every hour or so. While there are men of color depicted in the ads, there isn’t a single woman depicted in any of them. Those Americans who didn’t serve and don’t know anyone in the military might believe from these posters that only men can be Marines — which could not be further from the truth. Recently, a Navy veteran in North Carolina received a nasty note on her car when she parked in a veteran’s parking space at a supermarket, scolding her for doing so and telling her to “have some respect.” The person who wrote the note couldn’t even grasp the concept that women could be veterans.

By trying to hide female sailors and Marines in formation by putting them in male uniforms, it suggests that leaders are ashamed of women. Servicemen and women can be equal without having to wear the exact same uniform that, when it comes down to it, was designed for men, not women. Should the Department of the Navy not attempt to bolster its recruitment and retention of women by demonstrating that it’s willingness to listen to the opinions of its female officers?

For nearly three decades, women graduating from the Naval Academy were required to wear skirts to commissioning to show the thousands-strong crowd how many women they were. This year, they were required to wear trousers, so that the women were indistinguishable from the men. This is also the first year that all jobs are open to the newly minted female ensigns and second lieutenants. In one fell swoop, a feminist victory for equal opportunity, but a loss in the fact that women have to be visibly hidden in men’s uniforms.

The power of the female dress uniform items — skirts, heels, and the bucket cover — is that wearing them allows female sailors to present strength and femininity at the same time. This sends a silent message that you can serve your country without losing your identity as a woman. It demonstrates pride in our differences. And to those who can see women visibly represented in uniform, it reminds them that women serve: Girls can grow up to be sailors. Women can be disabled veterans needing care at the VA.

One wonders why a move that is so wildly unpopular among women in the military — especially female officers, who are being forced to foot the bill for a change few want — is being push through. When female officers required to pay at least $350 for new uniform items, that’s a donation that might have gone to CFC or the Navy and Marine Corps Relief Society. That’s airfare to fly to see your parents on leave. That’s a large chunk of childcare costs. And it’s now going to the pockets of uniform manufacturers. And it’s insult to injury; the uniform changes are unpopular, but the greatest offense is not only that few want the changes, but that then only one group will be forced to pay for it.

Who profits from these uniform changes that none need and few want, while basic allowance for housing is on the chopping block, and there are unpopular uniform items that have been left unchanged? Why is nobody telling Mabus, who has been an unabashed feminist, that on this one point, the emperor is wearing no clothes? Recent surveys of Navy officers found widespread satisfaction with the current uniform items that are being changed, and widespread dissatisfaction with the khaki and summer white pants, which have been left unchanged — so why these changes?

Part of the problem is that the women affected by the changes are largely powerless to stop it, outside of writing members of Congress. While the order to change the new uniforms is unwanted, unnecessary, and discriminatory, it’s a lawful order that must be obeyed — one cannot simply refuse to buy it once the deadline passes. Another problem is that those closest to the decision makers are likely saying, “yes” to the decision, deeming it not important enough to dissent.