The delta between men and women’s performance at recruit training is more than just an anomaly. Generations of female recruits... 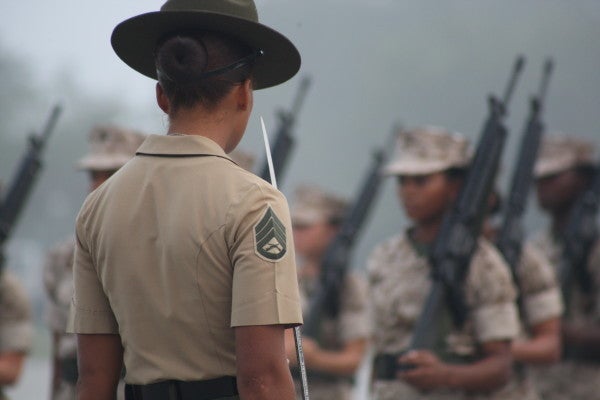 The delta between men and women’s performance at recruit training is more than just an anomaly. Generations of female recruits and Marines have been expected to underperform because of gender bias, or the lowered expectations for a group because of sex. Despite ample data indicating change is necessary, the Marine Corps is determined to maintain existing recruiting practices and segregated recruit training for women. Such a stance only serves to reinforce the sexism and gender bias so prevalent in the Marine Corps today.

America perceives the Marine Corps as the most elite of the military services. Sadly, this perception is not reality when it comes to female recruit training. Because of lowered expectations for women before and during recruit training, most male Marines and recruits view their female counterparts in an inferior light. But female underperformance in the Marine Corps is not a product of science, physiology, or a confidence gap. It is the result of systemic gender bias and segregation at recruit training.

Even after being questioned by the media on the issue, the Marine Corps produced no tangible evidence to substantiate the claim that segregated training works. Instead, service representatives and retired Marines imply that any call for leveling the playing field for performance and expectations at recruit training is an insult to female recruits and their drill instructors. In other words, female recruits are exemplary simply for taking the oath of enlistment, even if their lack of physical fitness and strength, poor mental resiliency, and lower rifle range scores make them potential safety risks to the Marines in their future units.

The impact of gender bias on training is best illustrated by the Excel spreadsheet used by the Recruit Training Regiment to track graduation event results. Rather than aligning the results in numerical sequence by training battalion (1st through 4th), only the male battalion statistics are laid out side by side for comparison (1st through 3rd). The results for 4th Battalion are listed as a separate category at the far right margin of the spreadsheet — a clear sign that the general perception by the leadership is that no comparison between male and female recruit performance should be made, much less expected. As demonstrated by the layout of the spreadsheet, female recruits are viewed as different and less capable, but their results are actually the Golem effect in action. Simply put, because women have been expected to underperform in training due to their gender, that is exactly what has occurred for decades. Underperformance has become a self-fulfilling prophesy.

The Golem effect for female recruits is best demonstrated by rifle range results, where for decades the female recruits maintained an initial qualification average of just 67–78% compared to the male recruit average of 85–93%. The male battalions had also historically produced significantly greater percentages of rifle experts and sharpshooters. Women were simply expected to shoot poorly. However, in 2014–2015, the female recruits achieved an unprecedented 91.68% initial qualification rate while also significantly increasing the number of female experts and sharpshooters. This was accomplished by increasing expectations for performance with the female recruits and drill instructors and convincing the male rifle range coaches that women should be expected to shoot as well as men.

Marine Corps officials have never acknowledged the significant performance gap between male and female recruits on the range, nor have they formally codified training changes to replicate last year’s success. Despite the decades-long failure of female recruits to live up to the motto “Every Marine a rifleman,” the service has repeatedly insisted that women who graduate from boot camp are just as qualified as the men. But existing data clearly illustrates that this assertion is simply not true.

Segregation supporters claim that women would be discouraged from joining the Marine Corps by the notion of competing with their male counterparts at boot camp. Once again, they have failed to produce evidence to support this assertion. Instead, existing recruiting data shows the opposite is true. Women who join the Marine Corps want to be elite. Evidence shows that when more is demanded of female applicants before they arrive at recruit training, they respond to the challenge and excel both at boot camp and in the operating forces.

Recruit discharge analysis for men and women supports this finding. Years of data maintained by both the Marine Corps Recruiting Command and recruit training depots confirms that regardless of gender, applicants who actively participate in the delayed entry program are more successful at boot camp. Female applicants who actively participate in physical fitness training alongside their male counterparts achieve better physical fitness test scores before and after training and are more mentally resilient. Regardless of gender, applicants who arrive at boot camp with above average physical fitness ability and were taught basic knowledge by their recruiters have significantly lower discharge rates and are also less likely to be injured in training.

In fact, when male and female applicants train together, push themselves to maximum exertion, and see each other physically improve as members of the delayed entry program, bonds of mutual respect are established. The opposite is also true. All too often, male applicants observe a double standard for women when it comes to recruiter expectations to attend weekly physical fitness sessions and make substantial fitness progress. They observe female applicants conduct separate physical fitness sessions because they aren’t able to keep up with the men. And they observe the women lag behind in terms of learning basic Marine Corps knowledge and get passed over for leadership opportunities within the pool of applicants. Pejorative stereotypes of women begin before they even arrive at boot camp. These stereotypes are then reinforced as soon as the recruits arrive at boot camp and the women are required to stand at the rear of the yellow footprint indoctrination formation before being whisked off to the segregated training.

While it is true that women are physiologically different than men, simply being a woman does not make one more injury prone, but being out of shape does. The data for initial strength test failures, mental health discharges, and lower extremity injuries supports the finding that unprepared women do not succeed at boot camp. Yet although existing data fully demonstrates that physically fit women are actually less prone to injury in training and are more mentally resilient during periods of stress, Marine Corps leaders and supporters continue to espouse the myth of female frailty.

Even after the service bucked the direction of Navy Secretary Ray Mabus to integrate recruit training, the Marine Corps failed to provide any evidence to support its assertion that existing practices for women are effective. It’s time for the Marine Corps to put up or shut up. As philosopher and social critic Søren Kierkegaard once said, “There are two ways to be fooled. One is to believe what isn’t true; the other is to refuse to accept what is true.” In digging in its heels and refusing to acknowledge the truth, the service is squandering a historic opportunity for institutional improvement and the elimination of systemic gender bias.