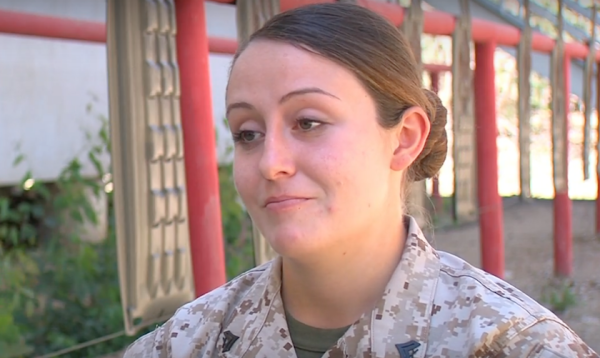 But as a marksmanship coach at Camp Pendleton, the chances of Preston squaring off with America’s enemies on the battlefield are extremely unlikely. However, that may change soon.

Preston, a former high school cheerleader, has just submitted her application for field artillery. It’s a move made possible by the Pentagon’s recent decision to allow women who qualify to join ground fighting forces.

Related: This Air Force general is set to become the highest ranking woman in US history »

“People were like, ‘you shouldn’t do that, because you’re a female, you’re a woman,’” Preston told San Diego’s KPBS news. “Why? I want to go.”

In 2015, Preston took part in a grueling, historic experiment to test whether or not women could handle the rigors of combat, which required her to load and fire Howitzers. Shortly after, in December, Defense Secretary Ash Carter ordered all combat arms units be opened to women.

Preston is fully aware of the flak her decision to become one of America’s first artillery women will inevitably draw from some of her male peers. But she doesn’t seem the least bit fazed. If anything, she’s cocky.

“I’m good at it, and I can do it better than some of the men can,” Preston said. “A lot of times they get kinda,” she added, reaching for a word, “kinda butthurt.”

“Butthurt” is a dismissive slang term for being easily offended that is popular in the military. It references the feeling one experiences after a spanking.