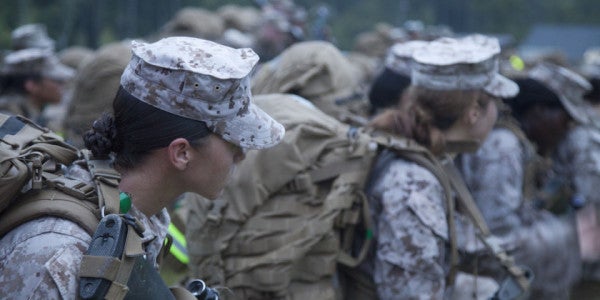 The U.S. Marine Corps is getting its first female rifleman and machine gunner later this year, service officials confirmed this week.

The Marine who applied to be an 0311 rifleman was a lance corporal, an official confirmed. The rank of the Marine approved to be an 0331 machine gunner is not clear. Kulczewski said the Corps is now in the process of meeting staffing requirements at the units that will receive the Marines.

Related: The first woman to graduate Ranger School is about to join the infantry »

In keeping with a Defense Department mandate and the Corps' own plan for integrating female troops into ground combat jobs, any infantry battalion with female members must also have a leadership cadre of at least two female officers or noncommissioned officers who have been at the unit for at least 90 days. Kulczewski said it's likely the Marines will not join their new units until December of this year.

While the units that will get the first female grunts have been identified by the Marine Corps, Kulczewski said, they have not yet been publicly announced.

The Marines who applied for infantry jobs are part of a small group of 233 women who were granted infantry military occupational specialties earlier this year after passing the Corps' enlisted infantry training at Camp Geiger, North Carolina, in order to participate in the service's research on integrating women into the previously closed units. While all the women are eligible to apply for infantry jobs, only the two enlisted Marines have done so to date.

Kulczewski said a more senior female infantry captain had also applied for a lateral move to a newly opened unit, but the request was denied based on the staffing needs of the Marine Corps.

After the two Marines reach their new units, the service will continue to research their progress. Kulczewski said the Marine Corps had created a 25-year longitudinal study to “assess all aspects and possible impacts throughout implementation.”

The Corps' implementation plan requires that the commandant be informed directly of certain developments as women enter all-male infantry units, including indications of decreased combat readiness or effectiveness; increased risk to Marines including incidents of sexual assault or hazing; indications of a lack of career viability for female Marines; indications of command climates or culture that is unreceptive to female Marines, and indications that morale or cohesion is being degraded in integrated units.

Officials are also rolling out new training beginning this month aimed at ensuring all Marines understand the changes taking place. Mobile training teams will spend the next two months visiting bases and offering two-day seminars to majors and lieutenant colonels that include principles of institutional change, discussions of “unconscious bias” and specifics of the Corps' integration plan. These officers are then expected to communicate this information to their units.

“The Corps applauds the time and efforts of those Marines who volunteered. Request like these help the Marine Corps to continue the implementation of gender integration throughout all military occupational specialties,” Kulczewski said. “The continued success of the Marine Corps as our nation's preeminent expeditionary force in readiness is based on a simple tenet: placing the best trained and most fully qualified Marine, our most valuable weapon, where they make the strongest contribution to the team.”