On Dec. 4, 2015, Secretary of Defense Ash Carter made the historic announcement that he is opening all military occupations... 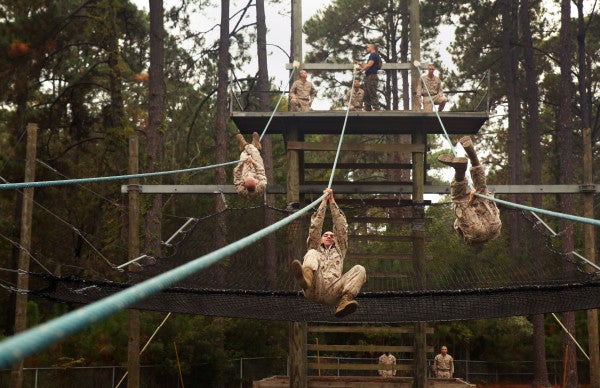 On Dec. 4, 2015, Secretary of Defense Ash Carter made the historic announcement that he is opening all military occupations and units to women; “no exceptions.” He directed the services to provide new integration plans that would open positions no later than April 1, 2016.

The new deadline is just around the corner and it looks like the Marines are going to get an exception after all. The Department of Defense recently released the newest set of integration plans. The Marine Corps, the only service that asked to keep some occupations closed, will keep Marine Corps boot camp training segregated. The integration campaign plan says that the Corps will develop a study plan to consider the “possible options to increase gender-combined training during boot-camp.”

At the March 5 Defense Advisory Committee on Women in the Services meeting, the Marines were asked about continued segregated training. Marine Corps representative Col. Raul Lioness responded by saying, “We have a current model that we believe is effective and is working.” The Marines have long maintained that segregated training is good for female recruits.

The problem with the notion of separate but equal is that we have a well-established history that documents the poor outcomes of such a practice. The military did it to Japanese Americans and African Americans, but eventually discarded the practice. We have only to look at the discredited Jim Crow-era laws that segregated people by color to know how this establishes structural inequalities and perpetuates bias and discrimination. The reality is that separate is never equal. In fact, “separate” creates a very negative two-class culture that disadvantages one group, but cloaks the disadvantage by claiming that it actually benefits the minority group.

Here is how it plays out in the Marine Corps today. The Marines have seven boot camp training battalions, four on the East Coast and three on the West Coast. Only one — 4th Recruit Training Battalion at Parris Island — trains female recruits. Because the Marine Corps maintains a narrow training pipeline, just one battalion for female recruits, they ensure that women make up less than 8% of the Marine Corps. This, in turn, causes the only battalion that trains women to be perpetually understaffed. The result is that there are negative training outcomes for the female recruits. They don’t receive as much instruction and the women graduate from boot camp with lower average training scores than their male colleagues.

Even if the Marine Corps were to dedicate two segregated training battalions to female recruits — adding one on the West Coast where there are none, thereby doubling the training pipeline — there would still be negative outcomes for women and for the Marine Corps by maintaining this practice. Last summer, one of my son’s high school buddies came home on “boot leave” after graduating from Marine Corps boot camp at Parris Island. He said that not only did his drill sergeants constantly deride the 4th Battalion, but that for two months the only thing he and the other recruits were called by the drill sergeants was “girls,” “bitches,” and “faggots.” My son’s friend joined the Marine Corps young and impressionable, but even he was disturbed enough by this practice to tell me about it.

More important than what this reveals about structural inequality and the culture of the Marine Corps is how it circumvents the added benefit that mixed gender teams will bring to combat units. Collective intelligence experiments at MIT have shown that teams are exponentially and reliably more intelligent when teams include both men and women. The Marine Corps’ own research bears out this finding. Furthermore, when Col. Lioness briefed best practices for integration, one of his slides highlighted the importance of “cohesive cohorts,” which is achieved by assigning male and female Marines who completed “school together to the same previously closed unit.” Diversity has never harmed us and research shows that mixing the sexes strengthens teams. Furthermore, training together reduces bias by ensuring that there are no double standards and no doubt about who has met all qualification standards.

It is time for the Marine Corps to give up the practice of separating and segregating. If the Marines are allowed to continue this practice then they will have, in fact, received an exception to policy because seven of the eight Marine Corps bootcamp battalions will continue to be closed to all women.