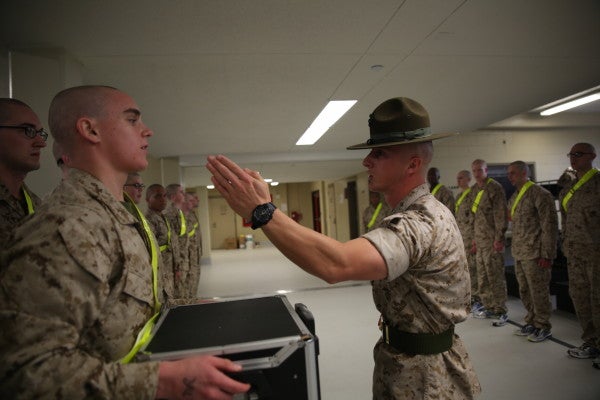 As the U.S. Marine Corps pushes to develop a more mature and highly skilled force, top brass may opt to raise the bar to get to boot camp.

“Our infantry Marines, that GT score has been down at 85 since Vietnam. Post-Vietnam, conscript, the draft, that's what it is. Now the Marines we're bringing in today are much higher than that,” Walsh told Military.com following a lecture at the Center for Strategic and International Studies on Thursday.

“We're bringing them in at higher levels, but we're going, 'Should we raise the bar?' We know to be able to operate in this environment, we need to have a little bit of a higher bar, so we're looking at that,” he said.

The drive to make the Marine Corps smarter and more senior began with the last commandant, Gen. Joseph Dunford, who told Congress last year that the demographics of the Corps needed to change to keep up with a more sophisticated, highly technical battlefield. The Corps, which is the youngest and most junior of all the military services, needed more noncommissioned officers and staff noncommissioned officers, he said.

The current commandant, Gen. Robert Neller, has continued his predecessor's push to shape the force, even saying in February that the Marines could scale back infantry and operational forces to grow new, highly skilled communities including cyber warfare.

Efforts to develop more sophisticated decision-making and leadership skills at every level in the service are also behind the effort to raise the bar for incoming Marines. The Corps' Expeditionary Force-21 strategy calls for smaller units to operate more independently and in a more disaggregated manner than they have in the past.

“The big challenge is looking to the future and bringing in the right talent. I'll be honest: we're looking very hard at recruiting,” Walsh said. “We're very successful in recruiting, but we're looking at raising the bar in our entry-level capabilities on who we bring in, GT scores and what they go to. What we're seeing is, the entire force we want to raise up to a higher level.”

Even though the Marine Corps has filled its recruiting goals for years, Walsh acknowledged that raising standards could be a tough sell for leaders in charge of making sure the Corps meets its targets.

“So the tension will be with us and manpower, because that's hard for them now to have to recruit,” he said. What I will say is we do pretty well. We meet our goals, but we meet our goals because our recruiters work very, very hard.”

In addition to raising standards for recruiting, Walsh said Marine leaders are exploring some practices used by special operations forces, which tend to be composed of more senior, experienced troops.

He said the Corps would continue promoting in its Squad Leader Development Program, started last year to retain and invest in quality enlisted infantry leaders. One of the initiatives now being explored under a new plan called Force 2025 would create an assistant squad leader to build in more leadership structure at the smallest unit level.

“The commandant has been pushing this very hard on looking at the special operations model for some of the things they do that are very good, where they've got higher rank, more seniority and this technical environment, bringing them in,” Walsh said. “If you think more SOF like in terms of more senior, better trained, better equipment, that's a lot of what we're looking at.”

Marine Corps leaders are expected to make key decisions about the future of the force and the Force 2025 strategy later this year.