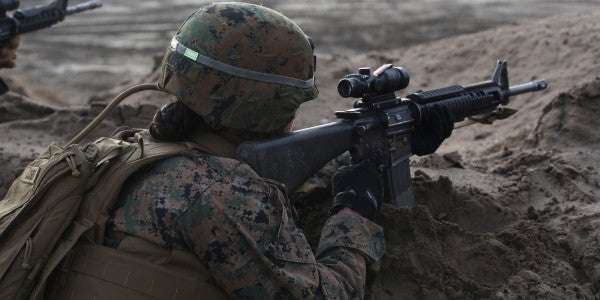 The Marine Corps has received its first request from an enlisted female Marine to join the infantry ranks, an official confirmed today.

“This process ensures the Marine Corps will adhere to its standards and will continue its emphasis on combat readiness,” he added.

A source with knowledge of the request said the Marine was a lance corporal. The Marine had requested a job in an 03XX MOS, the source said, indicating one of a number of previously closed jobs in the infantry field.

Only 233 female Marines have completed basic enlisted infantry training at the Corps' infantry training battalion at Camp Geiger, North Carolina. These Marines completed the course during a test period before combat jobs were formally opened to women. They all received an additional infantry MOS on top of their primary job specialty in January, and were offered the opportunity to make a lateral move to an infantry unit if they wished.

That month, the Marine Corps highlighted the story of Cpl. Remedios Cruz, a 24-year-old supply clerk who had participated as a volunteer in the Corps' women-in-combat study last year and said she hoped to be one of the first women to join an infantry unit.

But until now, neither Cruz nor any of the other eligible Marines have made a formal lateral move request.

With all combat jobs now open to women, any woman enlisting or waiting in the Corps' delayed entry program can request an infantry contract.

Marine officials have said that female recruits who want to enter a “loadbearing” ground combat specialty, such as rifleman, mortarman, or machine gunner, will not ship to boot camp until October 1 at the earliest.