How Will The Marine Corps Integrate Women Into Combat Arms Roles?

So, the Marine Corps was the last service to buckle on the women in combat arms question. It has finally... 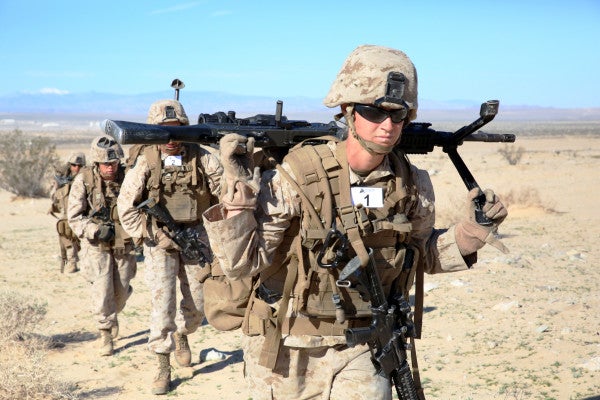 So, the Marine Corps was the last service to buckle on the women in combat arms question. It has finally laid out its plan for making it work.

It’s laid out in a document called the “Marine Corps Force Integration Plan,” telling how all subordinate commands will make it work.

In that plan, the Corps has made a solid to-do list. It prepares the schoolhouses of the Corps to prepare for up to 15% of their trainees to be women, while it acknowledges that only about 2% of combat arms will be comprised of women.

The plan expressly acknowledges the difficulties in maintaining equal physical standards. It maintains a commitment to maintaining merit-based standards, especially in regards to promotions.

Related: The story of the incredible women who served with special ops units in Afghanistan »

The fact the these factors are of concern to the commandant indicates that he is not stupid. He is worried about all of the same factors that skeptics have highlighted in their efforts to prevent women from earning their places in combat arms.

The end-state he is looking for is what all commanders want — in the words of the commandant’s order, “Sustained combat readiness and effectiveness.”

Neller says that when the integration plan is complete, the Corps will have “Allowed all applicants to compete for any MOS (Military Occupational Specialty) if they have the propensity and are fully qualified.” That sounds like a pretty fair thing to want.

Other than the basic Physical Fitness Test and Combat Fitness Tests that every Marine does annually, there is little guidance on the individual physical tasks that a Marine must perform. What few there are are contained in documents like the infantry Training and Readiness Manual. Most of the tasks are technical or skill based, e.g. program radio codes or a requirement to complete a particular course of fire on the rifle range. One of the few quantifiable physically demanding tasks in it is to complete a 20-kilometer road march in under five hours, but even that doesn’t prescribe the weight a Marine is required to carry.

The standard now is basically to just do it. That’s true of most specialties. Perform your job as best you can until you can’t, at which point you may eventually piss them off enough that they figure out a way to get rid of you — if they can. Very, very few Marines are formally reduced in rank by a Competency Review Board, which is what is supposed to happen when someone can’t meet the expected standard on tasks required for a particular job. Generally they just get poor evaluations until they don’t get promoted and are forced to leave. There’s a job somewhere peeling potatoes or stacking boxes on a ship for those who can’t hack it in the judgment of their leadership, but that’s about it.

If nothing else, the integration of women into the combat arms is sparking the creation of binary standards. This is something that has been needed for all MOSs for some time. Infantrymen need to carry a given load a given distance in a given amount of time. Artillerymen need to be able to lift shells, and mechanics need to be able to carry their parts.

The cultural opposition to women in combat is really just smoke and mirrors. Former Commandant Gen. James Amos used cultural arguments to oppose the acceptance of gays. We all now know that those arguments were short-sighted and wrong. The military was able to successfully able to integrate gays. The arguments that men will shirk their duties to keep women safe or that squatting to pee will decide battles are just as specious.

It all really comes down to physical standards. All of the other talk about career paths, retention, and the like are just window dressing. The Corps’ leadership, from Neller on down, is saying that they will maintain standards of physical performance.

Whether their trust is in play depends on how well the next few years play out. Women will go into combat arms. The die is cast on that already. They will fail in those MOSs at greater rates than men. That die was cast by human biology many thousands of years ago. The question is whether the Marine Corps will have the integrity to maintain their standards once women are admitted to those MOSs in greater numbers, and fail in greater numbers.

That is up to Neller, but it’s also up to every commanding officer and sergeant major in the Marine Corps. The next few years will set the precedent for how this experiment proceeds. If the Corps leadership digs in its heels and refuses to pass those who don’t meet standards, be they male or female, the Corps will be better with the inclusion of 50 percent of the population in all jobs.

If they don’t have the courage to do so, then including women will indeed be the disaster some have forecast. And it won’t be the fault of “politically correct” politicians, it will be the fault of the Corps for failing to live up to its own standards of integrity and moral courage.