On Sept. 14, Secretary of the Navy Ray Mabus told an audience in Cleveland that the Navy and Marines would... 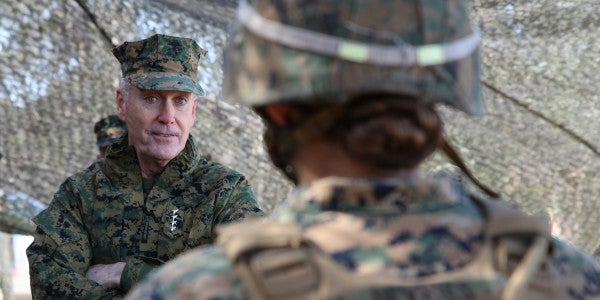 On Sept. 14, Secretary of the Navy Ray Mabus told an audience in Cleveland that the Navy and Marines would open all ground combat specialties to qualified service members regardless of gender, including positions as Marine infantry officers and Navy SEALS. However, Mabus’ statement did not sit well with the former Marine commandant and newly appointed chairman of the Joint Chiefs of Staff, Gen. Joe Dunford. Dunford reportedly met with Mabus days later to request that infantry positions remain off limits to women.

So far only the Marines have taken a hardline against integration and appear to be fighting losing battle. This is, at least in part, because it is framing the problem as a “battle of the sexes,” dominated by claims about male vs. female physical capability and how that impacts mission effectiveness. This is a narrow framing of the issue. Today we talk about “gender integration” as if it were only about differences between men and women, but gender integration in the U.S. military is about much more than the status of women. It is a question of how the military approaches the expression of sex and gender in all its variations. Is the U.S. military only interested in stereotypical men and women? Or will it also integrate people who, in one way or another, do not conform?

As an institution, the military is in the middle of a radical transformation in its relationship to gender identity. As of Sept. 20, 2011, the Department of Defense ended “Don’t Ask Don’t Tell,” the law that barred lesbians, gays, and bisexuals from serving openly. It is now on track to begin lifting those policies that prohibit transgender services members from serving openly as early as May 2016.

The cultural shift underway is one that allows for individuals to choose how to express their gender identity. This new approach clashes with policies that discriminate on the basis of pre-existing assumptions about an individual’s capabilities based on their sex and/or gender, where sex refers to physical characteristics and gender refers to behavior. If the military integrates transgender individuals, would positions that remain closed to women be open to female-to-male transgender service members? If a man serving in a specialty closed to women decides to transition to living as a woman, will she no longer be deemed physically qualified for the position? At what point in a person’s transition would he or she be considered to have sufficiently crossed the pre-established boundary between male and female? Would that person have to have sex reassignment surgery? Or is undergoing hormonal treatment sufficient? As Kristin Beck, a retired Navy SEAL and male-to-female transgender woman, and Shane Ortega, a female-to-male active-duty Army sergeant have already proven, these questions are not academic. These possibilities and their policy implications are real.

Critics of lifting the combat exclusion often emphasize that the military mission comes first and that integrating women will harm that mission by leading to “lower standards” or interfering with unit cohesion. These claims are based on a rigid, heteronormative, and cisgendered interpretation of sex and gender identity that denies the variety of human experience and existence. They share in common the same predictions of dire consequences that were used to claim that African Americans were unfit for service, and to keep Don’t Ask, Don’t Tell in place for nearly two decades. Claims that military readiness would suffer as a result of racial integration appear laughable today. As for the repeal of Don’t Ask, Don’t Tell, so far studies have found no evidence of a net negative effect on military readiness. As the vice commander of the Air Force Special Operations Air Warfare Center, Col. Brenda Cartier, remarked at the Hurlburt Field Pride Month Luncheon this past June, “DADT was repealed and life in the Department of Defense went on with comforting familiarity.”

Perhaps more important in terms of mission success, however — and contra to what critics of integration claim about lowering standards — the military is long overdue for a paradigm shift in how it assesses fitness. What too often gets lost in media debate about push-ups and pull-ups and rites of passage is that there is a science to physical and occupational standards. U.S. partner nations, such as Canada, have already moved from an antiquated system of repetitive motion requirements with separate standards for men and women to what are known as “task-based” physical standards, which are gender neutral and occupationally specific. Physiologists consider them to be a superior measure of whether or not a person is mission capable, regardless of the person. When given the freedom to accomplish a task in any way possible, people use their bodies in a manner that is most efficient. Women with more traditionally feminine forms, for instance, tend to use their lower center of gravity and relative leg strength to their advantage. As a result, on average, a woman will not need to do as many pull-ups as a man in order to meet the same task-based standard for many mission requirements.

Updating the approach to physical standards not only supports the larger cultural shift from a rigid male-female binary to a more open approach to how different individuals develop and use their bodies, but also provides a better measure of military readiness. In the U.S., the annual physical fitness tests that all active-duty service members must pass are adjusted for gender (they are also adjusted for age). Women are required, for instance, to do fewer push-ups than men. However, general physical fitness tests are fuzzy predictors of actual on-the-job effectiveness because repetitive motion requirements are not necessarily occupationally specific in a meaningful sense. In fact, physical fitness requirements are not the same as occupationally specific standards. The services are only now in the process ofvalidating occupational standards as mandated by the secretary of Defense in accordance with the lifting of the ground combat exclusion. For most positions, occupationally specific standards simply did not exist.

Rather than acting on this existing physiological research, the Marines spent more than $36 million on an experiment designed to assess the impact of integrating women on unit effectiveness. As retired Army Reserve Col. Ellen Haring argued in July 2014, this experiment had a number of design flaws, beginning with the fact that it used an all-male “control group” of experienced Marines to set the standard against which units with a progressively higher percentage of less-experienced women would be tested. This design is neither gender neutral, nor is it much of an experiment. Rather, it is a competition. Given the experiment’s design and what is already well-known about average male vs. female physiology, the Marines Corps’ findings that speed and accuracy on certain tasks declined as the percentage of women in the unit increased is not particularly surprising.

The problem with the Corps’ approach is not simply that it is flawed in terms of design, but that the conclusions they are drawing from it are out of step with the times. In a political climate where the military as an institution has already embraced policies based on a more open approach to gender identity — where women, men, gay, straight, cis, and soon trans individuals, are all already working openly together on the ground — it is no longer sufficient to argue that because most women are not as strong as most men, all women should be denied the opportunity to serve.