This Is What Marines Actually Do On Barracks Duty

Five minutes into standing duty at the barracks, one thought enters every enlisted Marine’s mind and runs on a loop... 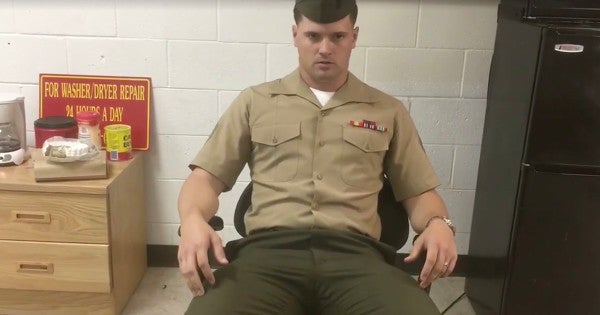 Five minutes into standing duty at the barracks, one thought enters every enlisted Marine’s mind and runs on a loop for the next 24 hours: “Join the Marine Corps, they said. It’ll be fun, they said.”

Or, if it’s not that, then it’s probably just “fuck my life.”

Ostensibly, barracks duty exists to enforce good order and discipline and to ensure that if all hell breaks loose because those animals up on third deck duct-taped a Marine to a floor buffer, someone is on hand and sober enough to call for help. It’s not the worst thing you’ll do in the Corps, it’s just boring as all hell, with no one to talk to or hang out with because as every Marine knows, a Marine on duty has no friends.

The guys over at Terminal Boots decided to film what barracks duty looks like. In the video, a Marine endures endless hours of boredom, which he tries to relieve by practicing his ninja skills with a pool stick, chain smoking cigarettes, and pounding energy drinks. Terminal Boots is a military humor page run by three active-duty Marines, who post videos about what life is like in an infantry unit during peacetime. While the video is hysterical, it also hits close to home for all Marines who have had the monotony of duty interrupted by a feeling of sheer panic when some pissed off staff sergeant charges in and demands to know why the barracks is a total wreck.