Imagine this: The year is 2018. You’re an American grunt. Your platoon is pinned down on the outskirts of Raqqa,... 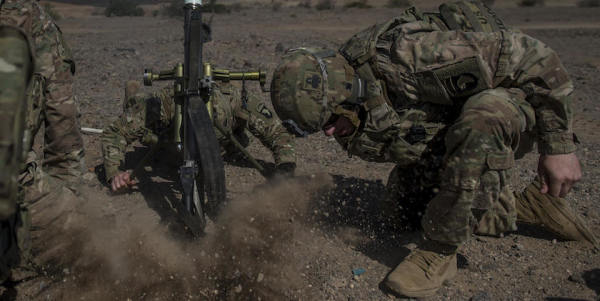 Imagine this: The year is 2018. You’re an American grunt. Your platoon is pinned down on the outskirts of Raqqa, encircled by jihadist forces. Supplies and ammunition are running low. Dangerously low. So you call in a mortar strike on your own position.

This isn’t a suicidal ‘Russian Rambo’ situation, though. Instead of high explosive material, the mortars are filled with goodies like 5.56 ammunition and, if you’re lucky, logs of Copenhagen. Beefed up on dip and ammo, your platoon begins laying down the scunion. The tide of battle turns and ISIS is defeated. Peace in the Middle East is finally restored.

The U.S. Army Armament Research, Development, and Engineering Center at Picatinny Arsenal, New Jersey, probably had a similar, if less dramatic, scenario in mind when they came up with the Ammunition Resupply Projectile, a recently patented GPS-guided hollow mortar round designed to deliver supplies to besieged troops on the battlefield.

According to the Army, the ARP patent “describes a tube-launched projectile that deploys a navigable payload in flight to accurately to a distant target.”

Sounds crazy, right? Well, it sort of is. Anyone who has ever called in a mortar strike on an enemy position and watched those shells explode way off target should be skeptical of this concept. The thought of supplies intended for your platoon falling into the hands of the people trying to kill you is terrifying, to put it lightly.

But the ARP concept — which the Army pursued briefly without success in the late ’90s, patent filings show — was developed with that risk in mind. To help ensure accuracy, a tail section with a “steerable decelerator system” is “secured to the payload deployment section,” and the system “also houses a guidance and navigation system made up of electronic, power supply and a parafoil control mechanism.”

If fielded, the ARP would only be employed in the most desperate of situations, like the scenario described above, when conventional resupply methods — like delivery via convoy or helicopter sling load — are no longer an option. In addition to ammo, Picatinny Arsenal also claims the ARP could be used to deliver supply items “such as surveillance electronics, or even a submunition.”

The besieged unit would relay the coordinates of their position to a distant mortar team, which would fire the mortars, and then use the GPS to guide the mortars to a point above that position. At that stage, if everything went according to plan, the parafoil would deploy, and the supply-loaded mortar rounds would float down to Earth like snow on Christmas morning.

However, as Popular Mechanics notes, the “Army’s mortar bombs max out at an external diameter of just 4.7 inches, leaving relatively little internal volume for ammunition.” That’s enough for 150 5.56mm rounds per shell. But, hey, 150 rounds is better than nothing, and you could always just call in more mortars. Just be sure to make it very, very clear that you’re requesting the ARP variety and not, like, a 120mm — you know, because that would hurt.