Sebastian Gorka, the controversial Hungarian-American Trump administration counterterrorism adviser with a resume that’s light on experience, is “a formal member... 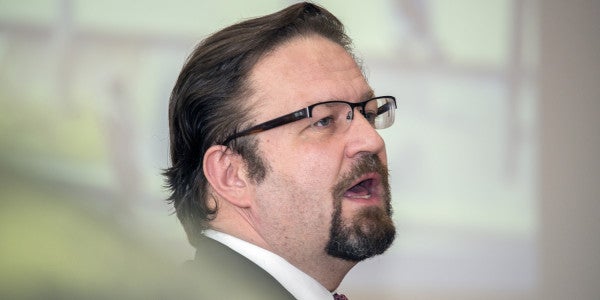 Sebastian Gorka, the controversial Hungarian-American Trump administration counterterrorism adviser with a resume that’s light on experience, is “a formal member of a Hungarian far-right group” that collaborated with the Nazis in World War II, the group’s leadership has told the New York-based Forward newspaper. If true, the allegations could put Gorka — a staunch defender of the White House’s hardline on immigration — in hot water regarding his own immigration status.

Leaders of the Vitézi Rend or “Order of the Valiant,” a group whose members were eligible to receive land taken from deported Hungarian Jews during World War II, told the Forward that Gorka “took a lifelong oath of loyalty to their group” in a report released March 16. The Vitézi Rend was banned after the war, but was reconstituted as a veterans’ group with right-wing leanings with the assistance of Hungary’s wartime leader Miklos Horthy, who allied himself with Nazi Germany from the mid 1930s until 1944.

“I have never had contact with Jews,” Horthy wrote in 1940. “I have considered it intolerable that here in Hungary everything, every factory, bank, large fortune, business, theatre, press, commerce, etc. should be in Jewish hands,” he added.

Gorka, who writes and speaks widely on the necessity of a war with “radical Islamic terror” and sits on a newly established White House Strategic Initiatives Group, previously took heat from media outlets for wearing a Vitézi Rend medal at public outings. The Forward has been especially merciless in its coverage of his coziness with anti-Semitic groups. Gorka, for his part, says he wears the medal as a keepsake of his father, who apparently was given the award by the order in Hungary.

But several of the group’s leaders, including Kornél Pintér, a friend of Gorka’s dad, were unequivocal in their insistence that the son had deeper ties to the Vitézi Rend:

“Of course he was sworn in,” Pintér said, in a phone interview. “I met with him in Sopron . His father introduced him.”

“In today’s world it is rare to meet anyone as well-bred as Sebastian or his father, Pali,” he added.

Beside his nagging Nazi problems, Gorka has had to endure press grilling on his now-dropped misdemeanor charge for bringing a handgun to Reagan National Airport, his habit of calling people who are mean to him on Twitter, the lightness of his experience and credentials in his field, and his apparent lack of an “appropriate” security clearance to work with the classified material his White House group covers.

But the Vitézi Rend connections could put a painful and ironic crimp in Gorka’s personal life: An immigration-law expert told the Forward the group could endanger Gorka’s status in the United States if he didn’t disclose his association on immigration and naturalization applications:

“This is a group that advocates racialist nativism,” said Einhorn. If Gorka did not disclose his affiliation with it, he said, this would constitute “failure to disclose a material fact,” which could undermine the validity of both his immigration status and claim to citizenship.

“It’s a material fact that, if disclosed, would have provoked a significant inquiry into the specific post-war role of this organization and Gorka’s activities in it,” he said.

Gorka didn’t respond to the Forward’s requests for comment and rebuffed queries from other reporters:

Sebastian Gorka repeatedly told me to talk to "White House press" when asked about @jdforward report he's a member of a Nazi-allied group.

But, the Forward points out that after previous coverage of his coziness with other far-right, anti-Semitic groups, he subtweeted his haters with a quote from a friend: