Have you seen this man? Whoops, I mean this one: Police are on the hunt for the two men and... 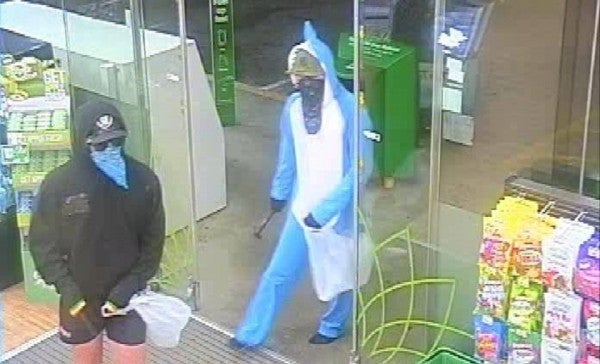 Have you seen this man?

Whoops, I mean this one:

Police are on the hunt for the two men and actively trying to reel them in.

The image was taken from a security camera at a gas station, in Canterbury, New Zealand, where two men, one of whom was in a blue shark onesie, committed a robbery at 2:20 am on March 7, reports UPI. The man in the shark onesie was armed with a hammer, while his accomplice, wearing slightly more conventional robbery clothing, a hoodie and bandana to hide his face, was armed with a knife.

The costume is instantly familiar to those who remember left shark, who became an internet sensation after Katy Perry’s 2015 Super Bowl show, when the performer went rogue and danced to his own tune. It looks like he’s not the only left shark to do so.

After the robbers smashed a glass shelf, the cashier took cover in a staff room with a colleague. Neither employee was harmed during the robbery. According to METRO, the thieves made off with a “large amount of confectionary.”

It’s unclear what the intent was: whether to get into the cash register or become internet famous for robbing a store dressed as a shark.