7 Ways To Actually Be An Effective Briefer

Editor’s Note: The following is an excerpt from the book “The Iron Major Survival Guide,” by Lt. Col. Dave Dunphy,... 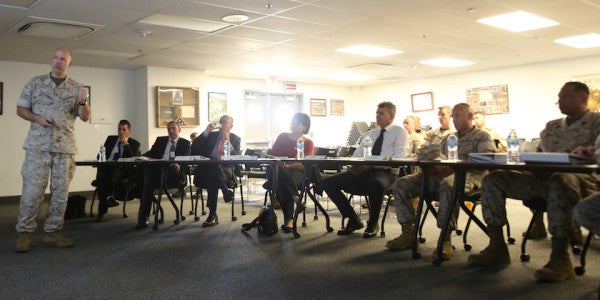 Editor’s Note: The following is an excerpt from the book “The Iron Major Survival Guide,” by Lt. Col. Dave Dunphy, a self-help book for senior captains, field grade officers, staff leaders, and managers of all types.

Lounging around behind a “Command Post of the Future” (CPOF) screen in your Spiderman Underoos with headphones and the highlighter tool in hand does not necessarily a good briefer make. As the ease and cost savings of technological ‘benefits’ pervade our cultural norms, things like video teleconferences and Situational Awareness system updates have become commonplace in our profession. Although there is some art associated with presenting in these kinds of mediums, we shouldn’t let go of fundamental briefing skills simply because we’ve rid ourselves of Combined Arms Services Staff School (more’s the pity). Whether you like it or not, you will spend a good portion of your professional career standing up in front of a room or tent full of senior- ranking people attempting to conduct one type of briefing or another. Like a shy, bumbling high school English class speech, few things will earn you a post-event wedgie in the bathroom like a botched brief to the Command.

Let’s review some of the often-discarded basics:

If you are unfamiliar with the preferred briefing techniques of the senior officer in the room, always default to a conservative stance—literally. Assume a modified or ‘loose’ position of attention at an open vantage point on the stage left or right side of the screen or dry-erase board, and stand relatively still. You should have the ability to observe both the screen and the audience without exhibiting excessive movement. Clasping (not wringing) your hands tends to be permissible by most. Minimize the weatherman’s excessive hand and arm signals, unless attempting to direct attention to an item on the screen by using the hand closest to the screen, so as to not bring your shoulder or back to the audience. No pacing around like a hungry zoo leopard, and no fat, greasy paws on the screen. Always use a pointer and never talk to the screen. Open your brief with a quick welcome, introduction, and salutation, and maintain eye contact with the audience.

When using a wooden pointer, refrain from demonstrating your fencing skills or working on your backswing. If you’re not pointing at the screen, keep the tip down and remain still. If you are using a laser pointer, exercise some muzzle control and be conservative with your movement and its use—no concert special effects support here. Be cognizant of laser fratricide & reflection, especially if briefing from a flat-screen or plasma TV. Some laser pointers are downright obnoxious, so save those super-nova green monsters for the convoy night live-fire, and choose from a moderate, less distracting arsenal, still viewable in the daylight.

Before kicking off the brief, spend a minute orienting your audience to any handouts that you might have placed in front of them such as slide decks, back-ups, spreadsheets, etc., especially if there are multiple items. If you are referring to any fixed maps or detailed sketches in the room or on a slide, pause to provide a quick orientation to those as well.

When briefing from slides, there are typically two extremes to avoid: (a) once the slide appears, you simply let the audience read it in awkward silence before making the somewhat arbitrary decision to advance to the next slide, or (b) you start with the slide title and read every bullet, verbatim, from top to bottom—much to the horror of your captive audience. There’s probably a happy medium in between, but conduct some reconnaissance to determine what technique the boss tends to lean toward. I recommend selecting a few important points to discuss per slide, and do so by pointing to the bullet, then facing the audience squarely and expounding upon the issue. Allow time for the audience to absorb the remainder before segueing to your next slide. And yes, don’t forget to segue; it provides the audience necessary context and connectivity from one slide to the next.

Everyone has a crutch or stall word readily available to tidy up those seemingly uncomfortable spaces between words, bullets, or slides. ‘Uhs’ and ‘ums’ are tolerable, but only in their most frugal employment. As a Small Group Instructor (SGI), I once counted over 115 ‘uhs’ in a student’s five-minute terrain and weather analysis brief. With every subsequent utterance, the word (or lack thereof) drilled irritatingly deeper into my cranium at such a point that I was unable to focus on the content of his brief in any real capacity. When I told the officer how many ‘uhs’ were uttered, he was incredulous, but the rest of the tortured audience quickly stepped in to voice their own frustrations. Speaking in public can be a nerve-racking event for many of us, especially before a room full of peers and higher ranking leaders. Work to develop steady, crutch-free speech that inspires confidence in your audience by rehearsing ahead of time and owning the material through its complete understanding. Side note—I would refrain from picturing your audience in the buff, however—unless you’re into that sort of thing, you freaky-freak.

When the cross-hairs site in center of mass and the sharpshooting begins, don’t be in a rush to answer questions based on only your partial or absent knowledge of the subject. Don’t be afraid to say “I don’t know, but I’ll get back to you with an answer ASAP.” Have a helper off-stage capture the question, issue or RFI, and review the due-outs at the end of your presentation if time permits. If this expression becomes endemic during your briefing, however, I would submit you might want to master the subject more thoroughly before presenting next time.

Most of what’s been discussed thus far tend to be more scientific briefing aspects. Some art comes with having the ability to make a quick determination as to the audience or chairman’s knowledge of the subject, and then modify the pace of the brief accordingly. This is especially true of executive-level or deskside briefings, where time is even more valued, and your loquaciousness isn’t. Bottom line: if the audience looks uninterested, speed it up.

Lt. Col. David Dunphy enlisted in the Army as an Infantryman in September of 1987, and commissioned as an Armor officer from the United States Military Academy at West Point in 1993. He served at multiple Armor, Cavalry, and Joint assignments, and instructed at the Armor Captain’s Career Course, Texas A&M; University, and the Army’s Command and General Staff College. LTC Dunphy continues to toil on staff as an operations division chief for the Joint Force Headquarters — National Capital Region at Fort McNair, Washington, D.C.