I hit refresh on the computer screen, again, growing more impatient. It was the afternoon of March 19, 2009, and... 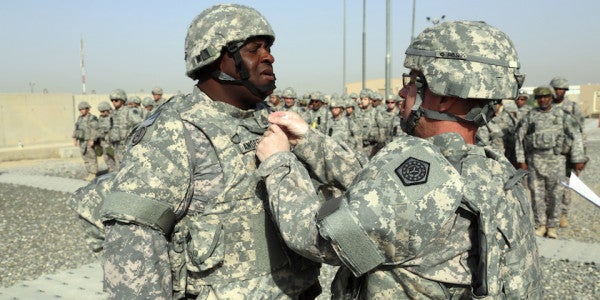 It was the afternoon of March 19, 2009, and I was in Germany, waiting for the sergeant first class board results to load. I wasn’t the only one: the Human Resources Command servers struggled with the tens of thousands of requests from staff sergeants hoping to see a number next to their name.

When the site finally opened, I scrolled through to my name, and no number, which meant no promotion. That was the first year I had been passed over, leaving me with thoughts of despair. Am I not good enough? Is this a sign that I should leave the Army?

I had almost given up completely when, in March 2012, on my fourth look, I saw a number by my name. Finally, I had earned the title, “Senior Noncommissioned Officer.” I can’t describe how happy I felt. It validated the years of long days and sacrifices. It was worth the wait.

On Sept. 29, tens of thousands of staff sergeants will sit at their computers, hitting the refresh button, as I had countless times. Some of them will get picked up. Many, however, will experience the disappointment I experienced three years in a row. Here’s my advice for those who do:

Instead of telling everyone within earshot about how getting a DUI like a guy you know who made the list might get you promoted, you should congratulate the people you know on their selection. Exchange notes: Ask to see their record, send them your record. NCOs should support each other, and the NCO Corps is much smaller than you think. Word travels quickly.

2. Look at the big picture.

Instead of complaining about how rigged the selection process is, read the after action review for the board and from your career management field. The people who sat on the board explain what they were looking for and what kept people from getting promoted. There is a reason why enlisted record brief updates, proper DA photo, and following your career map are mentioned in every after action review. If your records aren’t updated or your photo is old, that is a clear sign to board members that you don’t want to be promoted.

Instead of thinking you just need the right magical position (i.e., platoon sergeant) to make the cut, look at your performance in your current one. Performance in the job you’re in now matters more than the job itself. A well-performing squad leader can get selected over a poorly performing platoon sergeant. Make sure your position is on your career map and you have a blend of leadership and staff time, and are changing positions about every two to three years. Otherwise you are not as competitive.

Instead of convincing yourself that the only reason people made the list is because they knew somebody on the board, go find a mentor. Ask senior enlisted personnel in your career management field to provide an honest assessment of your performance, including areas to improve, before the next board. Their opinion and perspective matter, because they may have been on the last board, and they may be on the next one.

Instead of giving up, focus on the things you can control – PT score, weapons qualification, and civilian education. Improving in those areas may make all the difference next year. And your civilian education will help in your post-military career.

Instead of taking non-selection personally, realize that the Army is a business and will continue to exist long after you’ve left. Don’t tie your self-worth to your rank. If this was your last year of eligibility, take it as a signal to begin planning your post-military life. Reflect on what you’ve gained from the Army. It’s better to leave on a good note than burning bridges.