Financial planners will tell their clients that the single most important element of investing and building wealth is the time... 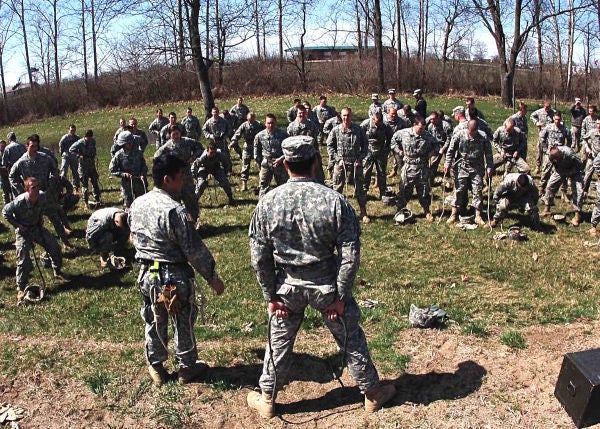 Financial planners will tell their clients that the single most important element of investing and building wealth is the time value of money. Investing early sets one’s growth potential on a much steeper trajectory. Investment in human potential is no different. Providing outstanding role models early in a career and pairing that with excellent mentorship is the key to maximizing the potential of our human capital. In that regard, the priority with which we assign officers and noncommissioned officers to our officer development courses is disturbing.

In an earlier article published on Task & Purpose, I alluded to a hypothesis that not all cadre across Cadet Command either understand or care about how much of an impact they have on our future officers. Therefore, it’s important to discuss some possible reasons for this effect, which include a stigmatized or false perception of what Reserve Officers' Training Corps instructors do and how they are assigned, as well as rigid personnel management principles that force difficult dilemmas upon some of our best senior officers.

This point may be debated according to individual experiences, but I believe that, depending on how a ROTC host program is organized, the officers or noncommissioned officers with the biggest impact on the early career of officers are the professors of military science (pre-battalion command lieutenant colonels), the senior military science instructors (master sergeants who have already served successfully as first sergeants), or the assistant professors of military science serving as operations officer or executive officer mentors (post-command captains). These cadre, not even combined, have arguably more contact hours with cadets than any other officer or senior noncommissioned officer throughout their first five years in the Army, with the exception of some special cases, like a company commander or field grade officer who takes a special interest in mentoring a particular junior officer.

Engaged cadre who possess the Army’s desired leader attributes and characteristics, who mentor cadets properly, and who expend the necessary effort to truly educate their cadets not only ensure the Army is producing quality second lieutenants, but set the initial trajectory for better first lieutenants and captains as well.

The longest-term goal I had after commissioning over nine years ago was to one day serve as a West Point instructor or ROTC instructor. I had some outstanding mentors as a cadet, recognized the impact they had on me, and desired to have that same opportunity following command. I wanted to have the privilege of positively impacting more young officers than any other post command job could have given me. Unfortunately, discussing my post-command assignment with my branch manager nearly became an exercise in futility. Every time, I had to fight through the inevitable pushes to be an observer/controller at the National Training Center or small group instructor at the Maneuver Center of Excellence and the thinly veiled surprise that I had aspirations outside the “approved” career path. In my branch manager’s defense, those are the jobs my officer evaluation reports said I was best suited for — the result of my senior raters writing what promotion boards have historically wanted to hear.

At first I thought this was just a personal problem; being one half of a dual-military couple, the number of assignments fully available to me was logically more limited and Fort Benning and Fort Irwin are places my wife and I could both work. However, the more peers I talk to, the more people I find who also had to leverage senior-leader interventions or by name requests in order to secure an assignment for which they were well-suited and desired for the right reasons. One person revealed to me that an unidentified branch manager allegedly told him over the phone (paraphrased), “Why would I put you in ROTC? I can stick any asshole in an ROTC billet.” I may be slightly biased given my current position, but I find the idea that we should let “assholes” have such a significant influence on our future officers to be quite troubling.

Possible solutions to this problem revolve around breaking the false preconception that officers can hide out in an ROTC assignment to “take a knee.” While the job does provide more flexibility in work hours, it is not the relaxing paradise of short days and summer vacations many seem to think it is. There are classes to teach and tasks from higher headquarters, which often forgets that cadets are not soldiers and I can’t cancel their other classes to receive last-minute mandatory training or attend some event 20 miles away. There are labs to supervise, office hours to mentor cadets and coach them through the planning of operations, evaluations to write, and papers to grade. While it is possible to leave in the afternoon a few times a week to catch a kid’s soccer game or cook dinner for your family, that time is made up at home in the evening grading tests or rehearsing lessons; the color guard needs to be driven and escorted to events on the weekends; cadets must be supervised during volunteer events, community service, or outside competitions in which they are representing the program; junior ROTC programs request assistance with inspections and pass in reviews on Saturdays; cadre are tasked to attend recruiting events on weekends and coordinate with community organizations during the evenings. We also provide networking with other military units and professional organizations, much of which occurs in the evening and on weekends.

Understandably, here’s the rub: Those are things good programs with the right people do. Technically, it is possible to avoid doing most of those things if one isn’t motivated to provide cadets with as many developmental opportunities as possible. The job would be easy if we just flipped through the provided PowerPoint slides and gave everyone As, regardless of performance. Knowing that, extra care should be taken to ensure that only the most self-motivated and competent cadre are selected for these positions. I’ll go ahead and discourage anyone who’s considering an ROTC assignment because they want to “chill out.” Don’t. If you’re doing it right, it is still a challenging assignment. If you’re doing it wrong, you’re failing our next generation of officers, and by proxy, all of the soldiers they will impact.

Changing this stereotype around ROTC also helps break the stigma associated with it during promotion boards, which have tended to favor those officers who stay as close to the operational Army as possible. It also helps end the well-intentioned practice of senior raters “taking care” of their best officers by ensuring that their next three jobs always mention “National Training Center Observer Controller” and “Career Course Small Group Instructor.” Perhaps more honest evaluation reports would lead to matching officers with the jobs for which they are best suited, and not the jobs for which we, for some reason, tend to associate with selections to battalion command.

The problem, unfortunately, is even more pronounced for the Army’s senior officers, the professors of military science, who set the tone for the whole program. Because of the timing of the selection boards that choose professors of military science and the next set of battalion commanders, many officers are selected for both positions. These double selectees are then forced to choose between the critical job of training and educating future officers and the equally important and coveted job of being a battalion commander. However, to make the decision more difficult, the Army chooses to stamp the permanent record of anyone who selects the former with “declined command with prejudice.” It is a mark that effectively ends any chance of ever being selected for promotion or command again. Is that the best way to manage personnel? Is the Army really like a scorned lover? If the Army asks you to the movies and you say, “You know, I’d love to go to the movies in a couple weeks, but I’m really interested in going to the bowling alley first,” does it make sense that Army should never ask you to the movies again? Obviously, you possessed a substantial number of qualities that it liked enough to ask you the first time. This policy ensures that at least some of our best candidates for professors of military science are unnecessarily pressured into declining that job so as not to end their own careers. I really can’t fault them for that.

The timing of the selection boards does not help. During Fiscal Year 2014, the last year in which the full board schedule has been published, the selection board for professors of military science fell barely a week before the selection board for battalion command assignments. Who would not want to opt in for both boards and maintain some semblance of flexibility in our tightly constrained, year-group based, personnel management system? Yet ironically, our best senior officers, at least according to selection boards, are the ones placed in this predicament, forced to choose between two important jobs, knowing that one will most likely destroy the chance of any further promotion.

The solutions are difficult, but worth pursuing. The timing of the centralized selection board for command is tied to the results of the lieutenant colonel promotion list, which makes it difficult to change. Similarly, the professor of military science selection board depends upon known vacancies based on retirements, promotions, selections to senior service colleges, etc. Separating the two boards in time to allow an officer to compete sequentially instead of simultaneously could be difficult. Perhaps a more elegant solution for the Army at large would be abandoning an inflexible personnel management system that punishes officers for having the audacity to believe that their job satisfaction may be somewhat related to their quality of life and job performance. This wouldn’t be the first time it’s been suggested.