Less than a month after the September 11 terror attacks, combat controllers with the Air Force Special Tactics Squadron and... 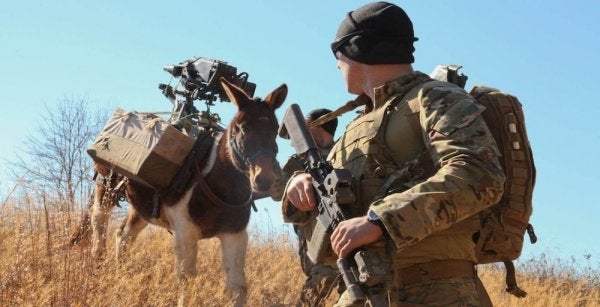 Less than a month after the September 11 terror attacks, combat controllers with the Air Force Special Tactics Squadron and Army 5th Special Forces Group’s Operational Detachment Alpha 595 were among the first U.S. troops to invade Afghanistan. Deployed from Karshi-Khanabad Air Base in neighboring Uzbekistan on October 10, the mission — codenamed Task Force Dagger — was simple: Link up with Northern Alliance fighters led by Soviet-trained former Uzbek warlord Abdul Rashid Dostum ahead of the multinational push to oust the Taliban.

But America’s most elite warfighter suddenly realized that the only transportation that could manage the eight-hour nighttime journey through treacherous terrain was a pack of horses.

“It was the wild, wild West,” former Air Force combat controller Maj. Mike Sciortino said on the 15th anniversary of Dagger in 2016. “When we first got in, they said we were probably going to ride horses… I had never ridden a horse before. I was like, are these guys serious?”

In an infamous photo distributed by the Pentagon, U.S. Army Special Forces and U.S. Air Force Combat Controllers with Northern Alliance troops on horseback in Afghanistan during Operation Enduring Freedom on November 12, 2001.Photo via DoD/Wikimedia Commons

Luckily, as the War Zone points out, ODA 595 commander Maj. Mark Nutsch grew up competing in rodeos and herding cattle during his youth in Kansas. (“The guys did a phenomenal job learning how to ride that rugged terrain,” Nutsch said in a different interview. “Eventually we got the same pool of horses we were using regularly”), and Task Force Dagger successfully completed its mission. But the mounted invasion of Afghanistan is a stark reminder that even the most elite troops must go to war with the gear they have, no matter what.

To that end, the Army rolled out an official guide to mounted warfare in 2004: the ridiculous Army Training Publication (ATP) 3-18.13, Special Forces Use of Pack Animals. A 2014 update, obtained by The War Zone through a Freedom of Information Act request, details the operational constraints of rolling up downrange not just on horses, but donkeys, mules, and other fantastic exotic beasts of burden like llamas and elephants.

Based on The War Zone’s delightful and comprehensive examination of the document, the Army’s bureaucratic approach to mounted warfare lies somewhere between strategically brilliant and batshit crazy.

The Army's official description of a common mule as of 2014.U.S. Army/The War Zone

A military that hasn’t planned for mounted cavalry since before World War II now has to figure out how to sling a metric fuck-ton of expensive next-generation gear over the back of some unruly Qatgani mares — which, per The War Zone, lends itself to some oddly specific equipment choices:

The ability of a submachine gun to lay a heavy base of fire from an unstable position makes it a valuable choice. A selective fire weapon with a folding stock (extended for accuracy when required) is the ideal choice. A very good choice of an immediate suppression weapon for the mounted unit is the U.S. M79 grenade launcher. It is much shorter and lighter than the M203, and the Soldier can maneuver it with one hand…

…The M249 squad automatic weapon would be the best choice for a general fire support weapon because of its size. The box magazine of the M249 is recommended because a belt of ammunition is too unwieldy around animals. The main problem with any of the weapons described is how their size relates to how they can be carried effectively and still be brought into action when needed. Larger weapon systems that are 50 pounds or less, such as the M60, M240, and M249 MG , should be laid across the top of the rucksacks that are attached to the animals.

Even if trotting into combat on horseback isn’t ideal, the Army emphasizes that mules and donkeys are extremely useful for lugging heavy weaponry like machine guns, anti-tank weapons, and single-use rocket launchers when approaching enemy locations on foot, which is why we have this delightfully ridiculous photo:

Naturally, we're dealing with unpredictable beasts here, so there are a few cautionary notes in the Army guide. Don’t carry classified intel on your pack animal, should it ghost in the middle of the night and fall into enemy hands, unless that’s what you want. Don’t ignore the risk of injury that comes with your pack animals “becoming frightened and breaking loose or stampeding” over the crack of a sniper rifle. Don’t bring your pack animals into the immediate vicinity of a firefight, as they are stupidly easy targets. Don’t bring your pack animals into urban operational areas, since broken glass and other debris are hell on their hooves. Basically, just don't.

The Army manual contains some amusing gems juxtaposing exotic beasts with the rigorous blandness of the Pentagon’s bureaucratic lens. According to The War Zone, there’s a whole chapter on “llamas and other animals,” which seems nonsensical, as llamas are dicks. And according to the Army, fuck elephants, too. “Elephants are not the easy going, kind, loving creates that people believe them to be,” the manual cautions. “They are, of course, not evil either.” Maybe Abraham Lincoln was onto something when he turned down “a supply of war elephants” offered by the King of Siam during the Civil War in 1862.

For now, horses will have to do when terrain doesn’t lend itself to the brand new JLTVs that both the Air Force Special Tactics and SOCOM are reportedly eyeing. But despite the glory of Task Force Dagger’s mounted incursion into northern Afghanistan, don’t expect to see Green Berets galloping after ISIS fighters, guns blazing, anytime soon. If the Army manual is any guidance, pack animals will remain strictly logistical assets for now: “Fighting from horseback is not considered a primary function of mounted soldiers today.”