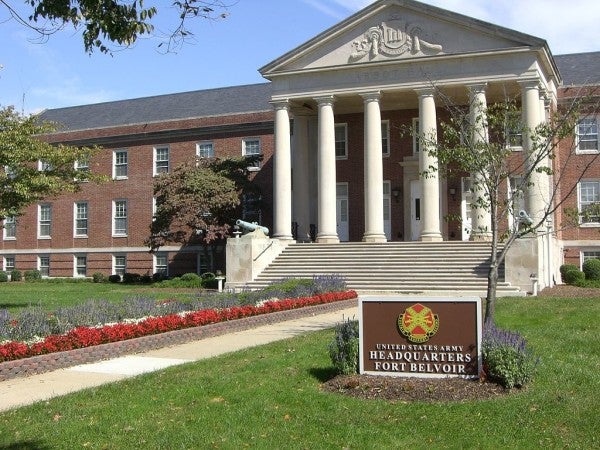 The Fort Belvoir homepage states: “A list of the organizations who call Fort Belvoir home reads like a ‘Who’s Who’ of the Department of Defense.” Often in the shadow of the Pentagon, there is perhaps no other Army installation in the world that can compare to Fort Belvoir’s diverse mix of commands, activities and agencies. This northern Virginia military installation provides logistical, intelligence, and administrative support to a wide range of United States military organizations.

Here is out list of all the things you need to know before relocating to northern Virginia.

WHERE IS FORT BELVOIR?

The main post is located off Interstate 95 (exit 166), 12 miles south of Washington, D.C., 9 miles south of Alexandria, 7 miles north of Woodbridge, and 5 miles west of Lorton.

Fort Belvoir is home to nearly twice as many workers as the Pentagon and is the largest employer in Fairfax County. The post is actually comprised of three geographically distinct properties: the main post, Davison Army Airfield, and the Ft. Belvoir North Area.

On-post housing is privatized with two to five bedrooms available in new and historic housing in 15 different villages. Homes are available for military families from all branches of service assigned to local duty stations to include Fort Belvoir, Joint Base Myer-Henderson Hall, Joint Base Anacostia-Bolling, and the Pentagon. Select homes are also available for geographical bachelors and single soldiers E6 and above. All homes offer dishwashers, refrigerators, high-speed Internet connection and electric washer/dryer connections.

If you have lived in on-post housing on Ft. Belvoir, we would love to hear from you. Leave a review of your housing experience here.

There are many options for housing off-post. But get ready for sticker shock as the D.C. suburbs feature 7 of the country’s 10 richest counties. Single family homes, townhouses, condos, and apartments can be found in both urban and rural settings a short distance from post.

Prices vary widely depending on the county you choose to live in. If you work with a PCSgrades reviewed realtor, you’ll find there is a rental or mortgage to fit every BAH.

There are four distinct seasons here. Winters are relatively mild with an average snow fall of 15.4 inches with three quarters of it falling in January and February. In the spring, people come from around the world to see the Cherry Blossoms along the Tidal Basin in downtown D.C..

Summers are hot and humid with temps often rising above 100 in July and August. Mild temps tend to stick around in September and October, but by Halloween the fall foliage is in full view with the vivid colors of autumn.

Hurricanes and Nor’easters can affect the area. While not common, NOVA has had a few tornadoes. And snow, well, some years there are only a few inches and others see larger snowfalls of over a foot. It doesn’t matter how much, snow usually cripples northern Virginia.

Unless you are coming from San Diego or Hawaii, you most likely will have sticker shock when you arrive here. Just about everything will be more expensive. The current housing market is also highly competitive. MostPCSgrades’ A-graded Realtors agree that it is an excellent time to buy. Additionally, while sales prices have continued to climb, mortgage interest rates remain at historic low levels.

Median sale prices completely vary throughout Northern Virginia, D.C. and even southern Maryland. The average sales price in Fairfax County (NOVA) is $560,919; this is up over last year. Click here to look at neighborhoods and realtors in the area around Fort Belvoir.

There are also five state-of-the-art Community Centers on post that offer free Internet access, copying and faxing services, along with free meeting and party facilities. There is a free community pool located in Woodlawn Village along with picnic pavilions, fitness trails, basketball and volleyball courts, a dog park, and playgrounds. Other amenities of living on-post include: an 18-hole golf course, a marina, field house, bowling center, movie theatre, Officer’s Club and pool, and skate park.

If you want to venture off-post, you won’t be disappointed! From mid-September until Thanksgiving, and again from about mid-January to June, Congress is in session. This means the hotels are full of guests and the restaurants and bars are doing a booming business. From mid-March through June, families and school groups pack the Tidal Basin to see the cherry blossoms and enjoy Washington’s monuments. This is also high season for protest marches.

May features a month-long celebration called Passport DC, which showcases more than 70 embassies and cultural organizations with tours and open houses. A summer highlight is the annual Fourth of July festivities. There is an Independence Day Parade along Constitution Avenue, A Capitol Fourth Concert featuring world renowned musicians and singers on the U.S. Capitol west lawn. And of course, fireworks over the monuments! Ft. Belvoir hosts a Fourth of July concert on-post as well as fireworks after dark.

From seeing all the names on the Vietnam Memorial wall to climbing the massive steps to the Lincoln Memorial to visiting the National 9/11 Memorial at the Pentagon, Washington’s monuments never get old! If you are lucky enough to have the chance to volunteer either at the airport or at the World War II Memorial during an Honor Flight, do it! Bring the kids! It is a special experience. You will never forget seeing these brave men and women visiting their memorial for the very first and for many the last time.

One of Ft. Belvoir’s largest events of the year is the annual Oktoberfest, a four-day festival highlighting authentic German food, beverages, music, and dancing. Fun events geared towards the whole family include: a carnival, Volksmarch 10K Walk, and a Craft Show.

Traffic in and around Washington D.C. is the worst or near the worst in the nation according to most traffic studies. A typical NOVA commuter spends an additional 82 hours behind the wheel annually due to traffic delays which is why many commuters use public transportation. Families choosing to live off-post often select housing in Fairfax Station, Lorton, Woodbridge, Alexandria, Springfield and Burke to avoid daily traffic snarls.

Variety is the key word when it comes to cuisine in the northern Virginia/Washington D.C. area. With an international flavor and the fact that many of those living in and around D.C. are originally from somewhere else, the cuisine is eclectic to say the least. In the mood for Salvadoran food…it’s here! Want to try Ethiopian cuisine? We have it! How about Indonesian? Yep! Regional specialties include: blue crabs from Maryland, peanuts, and country ham from Virginia.

Despite being close to a major urban area, there are many outdoor areas to enjoy including:

The beautiful Potomac River takes boaters past Mt. Vernon, the home of George Washington, and north to the nation’s capital, offering a view of the city’s monuments and parks.

800 acres along the banks of the Potomac River in northern Fairfax County, this park offers whitewater kayaking and canoeing, fifteen miles of scenic hiking trails, (five of which are multi-use for horseback riding, hiking, and biking), and rock climbing on the cliffs in Mather Gorge. The falls total 76 feet (20 m) over a series of major cascades.

This park dates back to the 18th century. The canal and towpath trail extends from Georgetown, Washington, D.C. to Cumberland, Maryland, a distance of 184.5 miles. There is outdoor recreation, picnicking, bicycling, fishing, boating and hiking available.

Located along the Potomac River, this park offers picnicking, bicycling and skating.

Rock Creek Park extends 12 miles from the Potomac River to the border of Maryland. The National Zoo is also located within Rock Creek Park. There is a lot to do including: picnicking, hiking, biking, rollerblading, tennis, fishing, and horseback riding. Additionally, there are concerts, planetarium shows, animal talks, exploratory hikes, crafts, and junior ranger programs.

Richmond, Virginia – 108 miles; 2-hour drive – Virginia State Capital with a thriving restaurant scene and craft beer breweries. Lewes/Rehoboth Beach, Delaware – 121 miles; 2.5-hour drive – What can we say? It’s the beach! Bring your lotion and your bathing suit and enjoy! Chincoteague Island, Virginia – 170 miles; 3.5 hour-drive – Do not miss watching the ponies at the Chincoteague National Wildlife Refuge on the quieter side of the Eastern Shore.