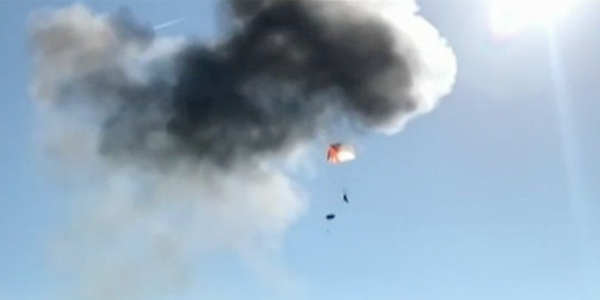 The unnamed pilot, a member of the D.C. Air National Guard's 113th Wing out of Joint Base Andrews in Maryland, safely ejected with minor injuries.

Military officials told Fox News the pilot ditched his malfunctioning aircraft in a wooded area outside of the nation’s capital “to avoid crashing into a suburban Washington neighborhood.” Nobody on the ground was injured.

The incident was, naturally, documented by bystanders on social media, but few eyewitnesses to the bizarre accident had a closer view than Patrick Dodson. The 38-year-old electrician told the Washington Post that he was standing on the porch of his home in Clinton, Maryland, when an odd sound drew his attention to the fighter jet, engulfed in black smoke and plunging toward his sleepy suburban neighborhood.

Here’s how Dodson described the intense experience to the Post:

Suddenly, a human shape shot up and away, sprawling in the sky; then another blob flashed up and spread into a parachute, jerking the human figure. He watched the pilot hang, drifting, as the plane nose-dived, streaking toward the house where he, his mother, sister and 4-year-old nephew were having a quiet morning.

“Get the out of the house,” he screamed to them as he began to run. He dialed 911 on the phone that he had just used to text a friend. “A plane is crashing,” he said. As he yelled the address, he realized he didn’t know if the plane was “one of ours or another 9-11 attack.” The jet was almost down, roaring in with a whoop, whoop, whoop. He threw his phone down as the plane streaked past the roofs on Wood Elves Way.

A fireball rose in the air. The blast knocked Dodson off his feet, he said. He jumped up and kept running, only to feel sharp stings in his arm and hand. He pulled a small piece of metal from his thumb, so hot he dropped it immediately.

Dodson, according to the Post, “could hear the whizzing of what sounded like bullets all around him and he ducked momentarily around the corner of a house, wondering if a jet-load of ammunition was about to explode.” The F-16C, one of four headed to a shooting range in Pennsylvania from Joint Base Andrews, was loaded with “training rounds” that proceeded to ignite amid the heat and subsequent fire of the crash, per Fox News.

Despite the smoke and flames, Dodson didn’t flee the crash, but ran straight to it. From the Post:

It had been years since he ran full out, and it was hard to find the breath every few minutes to shout: “Pilot! Pilot! Can you hear me?” He tried to look up when he could, dodging low branches and forest debris, hoping not to see the flyer dangling injured from a treetop. “Pilot! Pilot!”

He reckons it was about 12 minutes after he left his porch that he heard a police helicopter setting down in a field. He ran out from the trees, skirting the spinning rotor, and saw a figure about 30 yards ahead trying to untangle himself from parachute cords.…

He gave the pilot a tentative little salute as he approached, still unsure if he was friend or foe.

“Are you okay?” Dodson said.

“Yes,” the pilot answered. “Is everyone okay? I tried to stay away from the neighborhood.”

“I think you did. I think it hit the woods,” Dodson said. “Were you carrying live ammo?”

Dodson said the pilot hesitated, then nodded. “Yes,” he said.

We salute you, unnamed pilot, for following your training and crashing your Falcon as far from civilian residences as possible; if you’re going to ditch a 30-year-old, $20 million fighter, you might as well minimize the collateral damage.

And here’s to you, Patrick Dodson, for doing the right thing and running to aid a stranger in need. Sometimes heroism is as simple as running towards danger instead of away.