An Air Force pilot with the Thunderbirds flight demonstration team was killed in an April 4 crash after he lost... 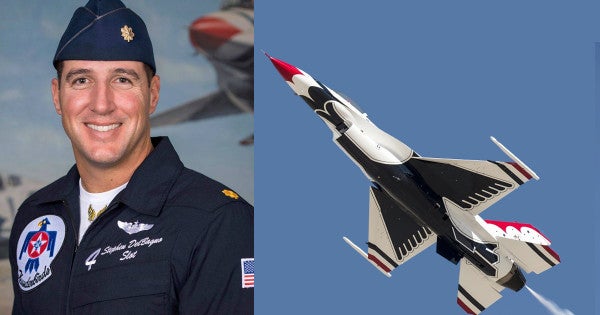 An Air Force pilot with the Thunderbirds flight demonstration team was killed in an April 4 crash after he lost consciousness while performing an aerial maneuver, the investigation into the incident determined.

Maj. Stephen Del Bagno died after his F-16CM went down at the Nevada Test and Training Range near Creech Air Force Base, Nevada.

Released on Tuesday, the investigation found that Del Bagno blacked out for five seconds after pulling 8.56 Gs. He regained his bearings one second before impact, but he was not able to pull the plane out of its dive.

Del Bagno “had a reputation for exceptional fitness” and had successfully performed many maneuvers that require pulling a lot of G-Forces, the investigation found. But being physically fit is not enough to protect against the effects of going from negative to positive G-Forces, which can cause a rapid drop in cerebral blood pressure.

Just prior to the crash, Del Bagno had been flying inverted, the investigation found. In the last two seconds of flying upside down, he endured a sharp increase in negative G forces, which lowered his blood pressure and heart rate at precisely the wrong time.

“The resulting outcome was more vascular space created by the widened blood vessels for the blood to flow away from the brain at the onset of the and a lowered heart rate and blood pressure making it more difficult for the body to counter that dynamic,” the investigation said.

As a result, Del Bagno was not physically prepared when he began a descending half-loop maneuver called a “Split S,” during which he pulled nearly 9 Gs, according to the investigation, which said that he should have waited two extra seconds before pulling the stick up for the final maneuver.

“Many other factors could have effected this pilots G tolerance on that particular day,” said Sorenson, who had not read the crash investigation. “Very sad and unfortunate mishap.”