“They knew we were coming.” 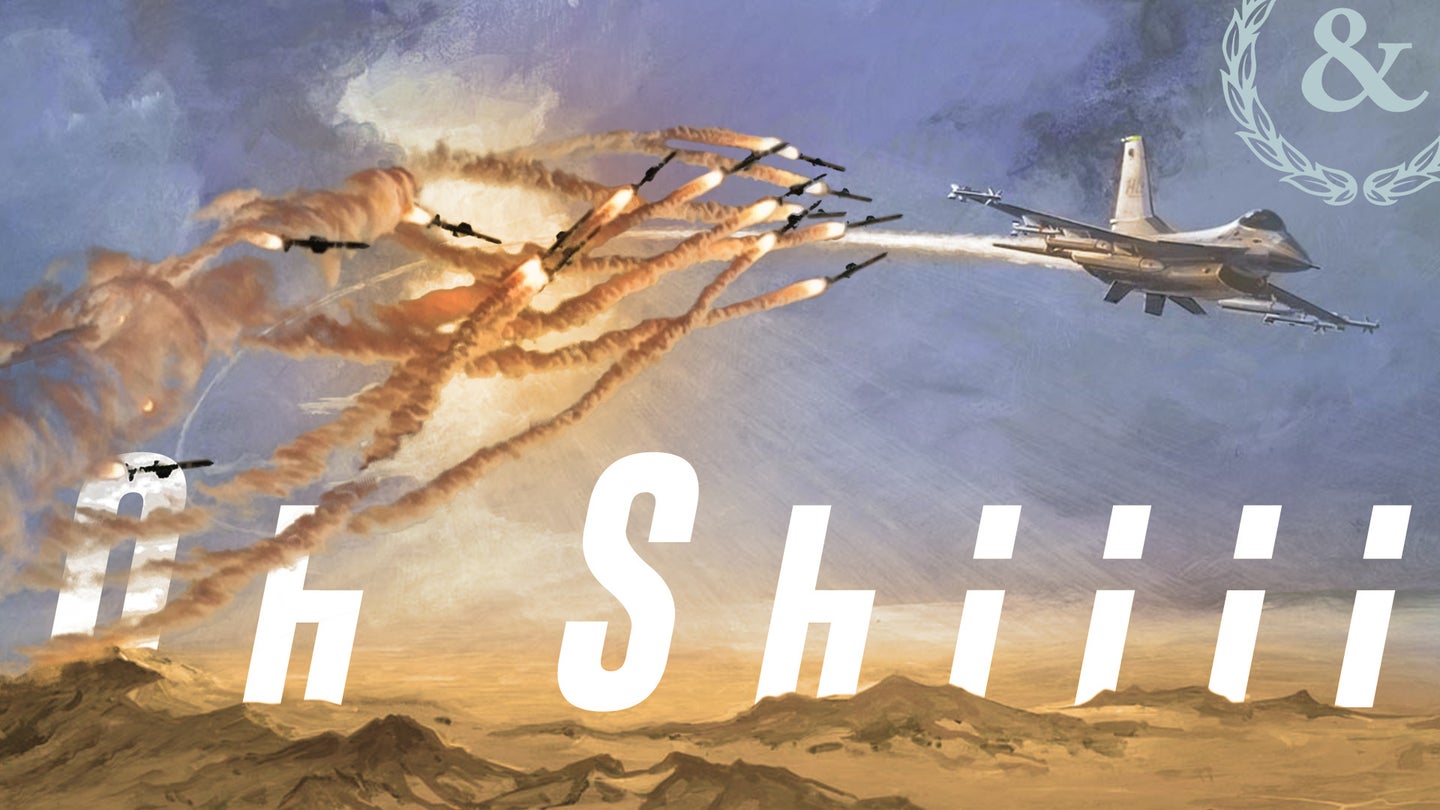 Air Force Maj. Emmett Tullia II escaped death half a dozen times on Jan. 19, 1991, when he maneuvered his F-16 through a fusillade of Iraqi surface-to-air missiles during a mission in which two of his fellow Viper pilots were shot down and taken prisoner.

Tullia was later awarded the Distinguished Flying Cross for his aerial acrobatics that day, which can be seen on video that was posted on social media several years ago. His ability to dodge six surface-to-air missiles is made even more extraordinary by the fact that his flares and chaff that were meant to confuse enemy missiles failed to deploy during his dance over Baghdad.

It was just a few days after the start of the U.S.-led campaign to push Saddam Hussein’s forces out of Kuwait when Tullia took part in a mission to attack an oil refinery in southern Baghdad.

“They knew we were coming, and as we were getting closer to the target area, the triple-A [anti-aircraft artillery] started coming up, the 35 mm stuff,” Tullia told Task & Purpose. “You could see an undercast of clouds from the triple-A going off.”

Tullia had spent years studying Soviet air defenses, which included reading classified studies about how long it took surface-to-air missiles to lock onto targets after being launched.

“I remember thinking at the time: Who the heck has time to analyze the reaction times?” Tullia recalled. “This time here it came true to life. When the thing moved, I could see that then the missile made a correction – and then on top of that, you could see that the missile is pointing at me, the missile is pointing in front of me. It was like: Wow, all this textbook knowledge comes right back into focus; and it was just pretty awesome to watch.”

While it made for an awe-inspiring sight, the Iraqis had fired so many missiles that Tullia had trouble figuring out which ones were coming at him and which were targeting other American warplanes.

For seven nauseating minutes, Tullia pulled a never-ending series of hard turns to evade the enemy missiles. He doesn’t remember how many G forces he was pulling at the time, but his blood pressure was so high that he was not in danger of passing out.

Tullia jettisoned his external fuel tanks to help him outfly the surface-to-air missiles. He said he remembers watching the first missiles miss him and thinking, “That is pretty damn cool.”

But his Radar Warning Receiver kept going off, indicating he was being shot at by even more missiles. Now Tullia had to worry about burning up his remaining fuel while he continued to dodge, dip, duck, duck, dive, and dodge.

As he took his plane to lower altitudes, he realized he was increasingly at risk of being hit by Iraqi anti-aircraft artillery. “Then I’d really be happy,” Tullia joked. “I go: I made it this far; I really don’t want to walk home.”

But after successfully dodging several surface-to-air missiles, Tullia got into a duel with a Soviet-made SA-6 missile that he could not shake.

“I turned and this thing is right on me,” Tullia recalled. “Every time I turn, the response is really quick. I was getting a fairly strong RAW [Radar Warning Receiver] indication on this thing. I was just turning as best I could. I go: Well, I’m just going to do what I can do on this thing. That thing came so close, I could hear the rocket motor as it went by – that was a little unnerving. And it went by, and I go: Wow, I’m still here. OK, let’s get back to business.”

At the end of his harrowing set of turns, Tullia was still airborne. But two other F-16 pilots who attacked Baghdad that day were hit and forced to eject — Capt. Mike Roberts and Maj. Jeffrey Tice — and later held as prisoners of war and tortured by their Iraqi captors before they were released in March 1991.

Tullia’s mission wasn’t quite over yet: As he prepared to head home, he spotted two other aircraft that he assumed were F-16s, but when he tried to reach them on the radio, they did not respond. When he locked one of the planes on his radar, both aircraft abruptly changed direction and flew North.

“It turns out later, when we got back, it was two MiG 29s that were launched to try and catch us on the way out,” Tullia recalled. “I thought: Dammit! I could have been a hero.”

By the time Tullia made it back to Qatar, his gas gauge said he had no fuel left in his tank. He was worried about his plane’s emergency power unit kicking in because it used hydrazine, a highly toxic substance that would have forced the airfield to temporarily close, preventing other planes with little or no fuel from landing.

Thankfully, he was able to land before the emergency power unit activated. Tullia said, adding: “It was divine intervention that thing didn’t go off.”

Tullia credited his commanders at the time for providing the type of leadership that he and other U.S. pilots needed to accomplish their missions during the Gulf War.

“In the Air Force, we get all this leadership stuff jammed down our throats, and until I saw it in action, I was just another one of those ‘Good grief, we have to listen to this crap again’-type of guys,” said Tullia, who retired as a lieutenant colonel in 1997. “When I saw actual leadership in action, it made a huge difference. It was amazing.  It was something I wish a lot of younger folks who talk about leadership would have an opportunity to see because it was something to behold – and something I’ll never see again.”