A brick too far: How General Mattis used Legos to plan out the invasion of Iraq

Gen. Jim Mattis needed a plan to keep the 5,000 vehicles of the 1st Marine Division chugging into southern Iraq. And every good plan needs a few good Legos. 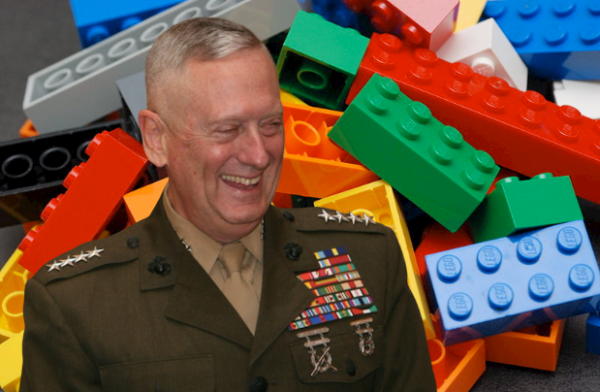 Marines are often teased for being nothing but a bunch of dumb crayon-eaters, but in reality, they also like to play with Legos while deciding how best to destroy America’s enemies.

At least, that’s how Gen. Jim Mattis and his staff came up with a way to keep the 5,000 vehicles and 20,000 Marines of the 1st Marine Division chugging into southern Iraq — a region where even the Iraqis thought their roads were of questionable quality — without a massive traffic jam.

In the months leading up to the invasion on March 20, 2003, the 1st Marine Division ordered 6,000 Lego bricks, assigned specific colors and sizes to units and vehicle types, then arranged them on the parade deck of division headquarters at Camp Pendleton, California.

Why would they do such a thing, you might ask, and why wasn’t I invited?

Well, planning an invasion involves a lot of complicated, mind-numbing logistics, and Mattis wanted his commanders to visualize how their individual units fit into the grand plan of the invasion, wrote Marine Maj. Michael Valenti in his 2014 paper, “The Mattis Way of War.”

In order to continue to visualize the “intricate process coordinating the movement and logistics of 5,000 vehicles and 20,000 personnel, he wanted a hands on tactile experience,” Valenti wrote.

After all, the major added, the push from Kuwait to Baghdad would be the longest Marine overland operation since The Barbary Wars of 1805, when Lieutenant Presley O’Bannon led his Marines over 600 miles to attack the fortress at Derna, Tripoli, in present-day Libya.

However, O’Bannon was part of a force that consisted of only seven Marines, a few sailors, 500 mercenaries and 100 camels, according to Marine Corps University. In contrast, the force under Mattis included Abrams tanks, amphibious assault vehicles, seven-ton trucks, and countless other kinds of vehicles carrying everything from gravel to infantry grunts.

“One has to marvel at the might — or hubris — of a military force that invades a sand-and-rock-strewn country but brings its own gravel,” wrote Evan Wright in his 2004 account of 1st Recon Battalion charge into Iraq, Generation Kill.

The potential for the whole operation to turn into Route 405 on Memorial Day was huge, as enemy fire, rough terrain and just plain old confusion took its toll. Thus, Mattis considered it vital to work out the kinks and contingency plans on the drawing board rather than in the field. It was time to set up the Legos, one brick at a time.

Through the Legos, “The Regimental Combat Teams gained a collective understanding of just how massive a full Marine Division was, and how drawn out the convoys would be over the limited road network through the muddy terrain of Southern Iraq,” wrote Marine Corps University in its 2006 report, With the 1st Marine Division in Iraq, 2003.

“This drill foreshadowed the complexity of the challenges posed by the Division’s plan to run up an unexpected avenue of approach over terrain that even the enemy questioned for trafficability,” the report added.

The first Lego Drill took place on December 5, 2002, on the palm-shaded parade deck in front of the HQ of 1st Marine Division, also known as the ‘White House,’ the report said, while a second was held on January 10, 2003, at Camp Pendleton’s LZ Horno. Both events were so important that Mattis himself flew back from Kuwait to attend them.

“These drills shaped the actions that would take place on the ground in Iraq in a few short months,” the report said.

'The mother of all terrain models'

Still, the drills were far from perfect. While the Legos were helpful for commanders trying to visualize what was happening at the micro level, the small pieces were hard to see from the macro level.

“It was confusing for the spectators once the players began to move their tiny pieces on the vast terrain model,” the report said.

The Marines needed to adapt and overcome once more. The result would come to be known as the Jersey Drills, where representatives of each unit wore color-and-number coded football jerseys and stood around like human Lego pieces on a scale model of southern Iraq.

The first of the Jersey Drills was held on February 7 in Camp Matilda, Kuwait. However, a true rendering of the invasion would require more than just a couple of bright-colored jerseys. Over the next two weeks, the division brought in D-7 bulldozers to prepare what became known as ‘the mother of all terrain models,’ just east of Camp Matilda. There was even a sound system prepared, allowing American and British commanders to hear what was going on across the model:

“By pushing around a great deal of sand, they expertly constructed a multi-tiered amphitheater in the desert, complete with an angled sand table surface, 100 meters on a side, with plenty of seating around the perimeter,” the report said. “There was a ‘vulture’s row’ for key leaders, allowing them to look down on the battlefield from atop a high hill….The review allowed all units to visualize their role in the coming fight.”

How the rubber met the sun-blasted road

As with any battle, not every part of the operation visualized with Legos and Jerseys went according to plan. For example, in Generation Kill, Wright described how the chaotic battle of Nasiriyah on March 23 brought the entire Marine invasion to a screeching halt.

But then, after leaving the highway for a smaller road leading to Nasiriyah:

“within an hour Colbert’s team is mired in a massive traffic jam … Marines who haven’t slept or stopped moving in days loll about in the shade of Humvees and trucks stopped on the road, dozing with their flak jackets off. Others lie in the sun, MOPP suits partially opened, heads back, trying to soak up rays.”

So all of this goes to show that the best laid plans still get tossed out the window after first contact with the enemy. But it helps to have a plan in the first place, and for that, sometimes all you need is a few good bricks.