John Gaultier kept treating his fellow soldiers even after German shrapnel hit him in the thumb and foot. 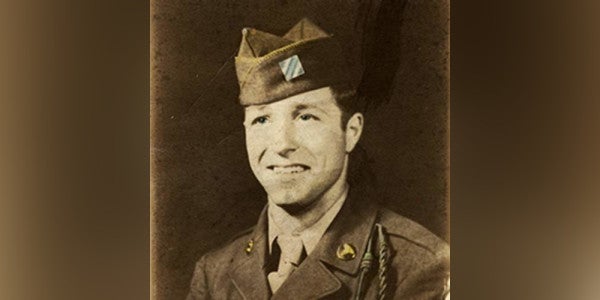 Seventy-five years ago, John Gualtier was a young combat medic, serving with the U.S. Army in World War II, when he came under heavy artillery fire. Shrapnel hit him in the thumb and foot in the spring of 1945 as German forces tried to stop his unit from crossing the Isar River. His fellow medics quickly bandaged him in the field so he could continue treating other soldiers who were more grievously injured.

“We were so busy, we had so many wounded soldiers, when I got hit they just took care of me, and we went on treating other soldiers,” he recalled, speaking by phone from his home in Vinton.

Now, after years of efforts by friends who pushed for him to be recognized, the 94-year-old is being awarded the Purple Heart, a medal given to armed forces members wounded by the enemy in combat.

“I was so shocked, I couldn’t believe it. I never dreamed I’d ever get it after all these years,” Gualtier said.

He said when medics treated a wounded soldier, they were supposed to fill out a record card, but that didn’t always happen in the chaos of a battlefield. Without that official record, an earlier application he submitted for the Purple Heart was turned down.

That didn’t stop his fellow members of the Veterans of Foreign Wars and American Legion in Vinton from pushing for Gualtier to be recognized.

“He said he didn’t deserve it and didn’t need it, and I said, ‘John, you earned it,’” said his friend Ron Geiger, an Air Force veteran who served in Vietnam.

Geiger helped secure a letter testifying to Gualtier’s injuries from another veteran whom he had served with, and they resubmitted the application. This time, it was successful.

“It’s kind of a validation for him, more than anything else,” his wife Jill Gualtier said.

In addition to World War II, John Gualtier served in the Korean War. He has received numerous awards, including the Bronze Star and the Combat Medic Badge, as well as recognition of his volunteer efforts on behalf of his fellow veterans.

‘I couldn’t talk about it’

But it took decades for him to even admit to anyone he had served at all.

During World War II, he helped liberate Gunskirchen Concentration Camp as a member of the 71st Infantry Division. The things he saw there, the 15,000 sick and starving prisoners surrounded by the dead, haunted him.

“For years I couldn’t talk about it at all. I never would tell anybody I was even in the service. I just said I never served,” he said. “I just didn’t want a lot of the memories coming back. I had horrible nightmares, and I just put myself in a shell, and I stayed that way for years.”

He credits Vinton high school teacher Kelly Steffen with helping him talk about his experiences again, when she persuaded him to share his story with her students. It took two attempts — the first time, he had to leave midway through the talk, due to his post-traumatic stress disorder. The second time, he was able to make it through, and he’s talked to classrooms regularly since then. It has been therapeutic.

“I’ve got to give the kids credit in the high schools. They really got me back into reality,” he said.

After one of his talks, to a group of high school teachers in Des Moines, one of the teachers told him she had a relative who was a prisoner in the Gunskirchen camp he helped liberate. A week later that survivor, Martin Weiss, called him.

“That changed everything,” Gualtier said.

Their stories were highlighted in the 2018 documentary “Heroes Among Us,” which was funded by the Thaler Holocaust Memorial Fund, Humanities Iowa and the National Endowment for the Humanities.

Gualtier also started sharing his story with other veterans.

“I’m in a VA group therapy group for combat veterans. I’m the only World War II and Korean War veteran in it. The rest are Iraq and Afghanistan and Vietnam veterans. They all seem to have adopted me,” he said.

“I’ve had the opportunity to talk to at least three or four Iraqi war veterans who were suicidal. I think it helped them a great deal. I attempted suicide twice myself, so I know what it’s about. I tell them I’m so glad I never succeeded, because I’ve done so much, for veterans, for school kids.”

Geiger said Gualtier has paid Legion dues for veterans who couldn’t afford them, helped many veterans, including himself, through the paperwork to get their Veterans Affairs benefits, and has booked more than 10,000 hours volunteering at the VA, often driving other veterans to their appointments.

“I can’t believe all the things he’s done through the years for other people. Gee whiz, it’s just unbelievable,” Geiger said.

It was supposed to be March 28, but was postponed because of the coronavirus pandemic. It has been rescheduled for 2 p.m. June 20 at Vinton-Shellsburg High School, 210 W. 21st St., Vinton.

“He’s been waiting 75 years to get his Purple Heart,” she said, and she’s glad it’s finally happening.

“Anything that needs to be done in the community, John will be there. He goes above and beyond, he’ll do anything for anybody. He’s helped a lot of military people get help when they need it.”