“There were so many things covered in fuel and burning. It looked apocalyptic.” 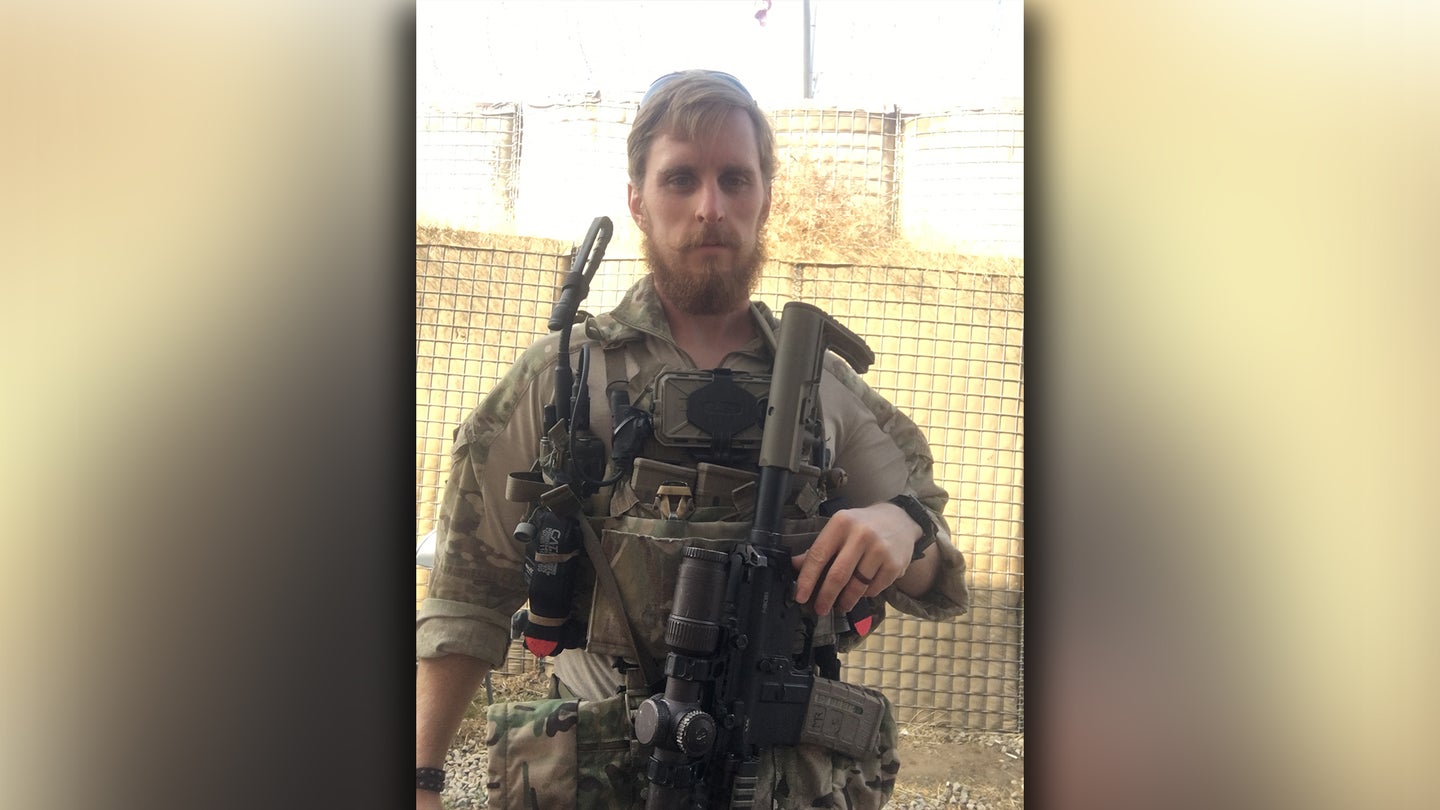 U.S. Air Force Staff Sgt. Michael Rogers, 57th Rescue Squadron pararescueman, poses for a photo while deployed to an undisclosed location in Afghanistan in the winter of 2019. While deployed, he was a technical rescue specialist and was tasked to recover personnel when required. Rogers was awarded the 2021 Air Force Sergeants Association Pitsenbarger Award for his efforts in treating seven individuals after an explosion. (Courtesy Photo).
SHARE

Staff Sgt. Michael Rogers was watching a soldier through his night vision goggles when all of a sudden the world blew up. It was 2019, and the Air Force pararescueman was accompanying an Army Special Forces team on a mission to secure a Taliban ammunition dump in Afghanistan. A few Special Forces soldiers were sorting through a Taliban stockpile of homemade explosives, mortars and RPGs when it exploded, throwing the mission into chaos.

“I was looking at one of the guys organizing the pile through my night vision goggles when all of a sudden we saw a flash and heard two bangs,” Rogers said in a recent press release. “We then felt the concussive force from the explosion and immediately thought we were under attack, so we prepared to fire back.”

As a pararescueman, or PJ, Rogers was well-prepared for chaos. After realizing that they were not under attack, he and a Special Forces medic got to work helping the wounded in what was a mass casualty incident: an SF engineer was blown over into a ditch and appeared to be unconscious; an SF communications sergeant was set on fire with RPG fuel after it exploded near him; and an SF intelligence sergeant was “in bad shape” on the other side of the explosion, the press release said.

“The first thing that comes to mind is fire,” said Rogers, a member of the 57th Rescue Squadron, looking back on the event. “There were so many things covered in fuel and burning. It looked apocalyptic.”

“They started going off in his kit and were burning through the material, cooking off the rounds in the bottom of his magazine,” Rogers said.

The communications sergeant ripped off the burning radio, but that in turn reignited himself. Rogers meanwhile ripped burning grenades off the intel sergeant and threw them away. Though the press release did not specify what happened next to the communications sergeant, Rogers said reinforcements arrived and he directed them to apply tourniquets to three of Rogers’ limbs, which were bleeding heavily.

“He had a lot of blast injuries throughout his whole body,” Rogers said.

The team worked desperately to save the intelligence sergeant. They ran through three medical bags and placed themselves between him and the stockpile to protect him from the ongoing explosions. But the intel sergeant wasn’t the only one in need of treatment, and Rogers worked on six other teammates and also coordinated a medevac with the ground force commander. The medevac arrived over an hour later to carry the intel sergeant to a surgical center. Unfortunately it wasn’t enough, and the sergeant died later that night.

“We kept trying to resuscitate the intelligence sergeant as best we could on the way to the hospital,” said Rogers. “After about 30 minutes at the hospital, [the medical staff] assessed his condition and determined he just wasn’t sustainable.”

The PJ stayed with the sergeant throughout the night as his team came to say good-bye.

“The intelligence sergeant was an ultimate professional,” said Rogers. “He’s definitely the best intel operator I’ve ever known. He was key to ours and the Afghan’s success that winter. Being able to hold that region… a large portion of it was due to his efforts. He really cared and believed in his mission.”

As difficult as that night was, it was only one among many during Rogers’ deployment to Afghanistan, which was his second to that country. Sixteen-hour days on foot or in a vehicle was an average day for Rogers and his team.

“The area we were in was experiencing a full surge by the Taliban, with them trying to take and retake several districts and key cities attached to those districts,” said Rogers. “We were just trying to focus on a few districts that were holes for drugs and equipment, and prevent that from continuing to worsen.”

Of course, that night was particularly bad: the tip that led Rogers and the Special Forces team to the stockpile came from a local village which had been attacked by over 20 RPGs, two of which went right across the hood of Rogers’ vehicle as they were trying to return fire. The compound with the stockpile of explosives was identified by the locals as a Taliban headquarters building, the press release said.

For his actions that night, Rogers was awarded the 2021 Air Force Sergeants Association Pitsenbarger Award. That award is named after Staff Sgt. William H. Pitsenbarger, the PJ who died treating and defending a unit of soldiers pinned down by Viet Cong fighters in 1966. The 2019 film The Last Full Measure is about the effort to award Pitsenbarger a posthumous Medal of Honor.

Despite his award, Rogers said he didn’t do anything his buddies wouldn’t have done.

“It’s an honor to receive [this award], but I don’t think anyone else in that the same circumstance would have done anything different,” he said.

The reason for the stockpile explosion was an accidental discharge by partner forces, the press release said. Just that one accident changed Rogers’ life and those of his comrades, and gave him a newfound appreciation for the sacrifices made by American service members abroad.

“The men I was with didn’t have to work as much as they did,” Rogers said. “Everybody that was there was passionate about their job and doing it right. This loss wrecked our team. Losing families, losing a brother. Those men I was with are our absolute heroes, and I would fight alongside them any day, anywhere.”

Featured image: U.S. Air Force Staff Sgt. Michael Rogers, 57th Rescue Squadron pararescueman, poses for a photo while deployed to an undisclosed location in Afghanistan in the winter of 2019. While deployed, he was a technical rescue specialist and was tasked to recover personnel when required. Rogers was awarded the 2021 Air Force Sergeants Association Pitsenbarger Award for his efforts in treating seven individuals after an explosion. (Courtesy Photo)