A dramatic rescue operation played out at sea, 1,300 miles east of Cape Cod recently, when seven pararescuemen lept from... 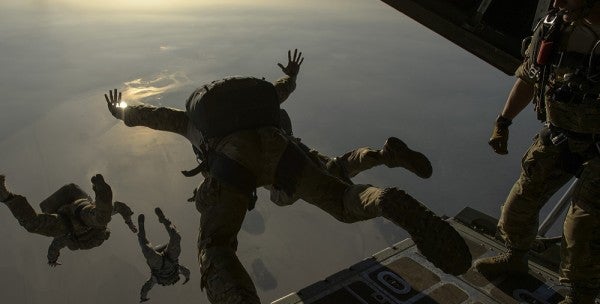 A dramatic rescue operation played out at sea, 1,300 miles east of Cape Cod recently, when seven pararescuemen lept from a C-130 into the Atlantic Ocean at night to rescue injured sailors aboard a cargo ship that caught ablaze.

The stuff of television and film, operations like this are the day-to-day for PJs — special operations forces trained to execute high-risk rescue missions whose motto is “These things we do, that others may live.”

Related: 24 Hours After Getting Shot In The Head In Afghanistan, This PJ Went Back To The Fight »

At 7 a.m. on April 24, the Motor Vessel Tamar, a 635-foot long cargo vessel from the Marshall Islands, sent out a distress call after an explosion in its storeroom caused a fire to spread across the ship, killing one seaman and badly injuring three, according to the Department of Defense. The Tamar was en route from Gibraltar to Baltimore, Maryland, when the incident occurred. The cargo vessel quickly contacted the Coast Guard for aid, which in turn contacted the New York Air National Guard, whose pararescuemen jumped into action.

Members of the 106th Rescue Wing assigned to New York Air National Guard, run to add additional supplies for a rescue mission to Lajes, Azores, April 24, 2017, Westhampton Beach, N.Y. The mission is to locate the aircraft and drop para-rescuemen who will board the ship and provide emergency medical care to the crew.U.S. Air Force photo by Master Sgt. Cheran A. Cambridge

Six pararescuemen and a combat rescue officer from the 103rd Rescue Squadron boarded a HC-130 search and rescue aircraft at 1:30 p.m. Six hours later, the PJs were parachuting from the aircraft into the ocean. Once in the water, they boarded a rigid rescue boat that was also air-dropped into the ocean and set out for the Tamar. Tragically, another crewman died of his injuries before the airmen could reach the vessel.

The PJs reached the Tamar by 9:30 p.m. and began rendering aid to the injured seamen. As the Tamar passed beyond 1,300 miles of the U.S. coast, the rescue operation fell under the purview of the Portuguese Coast Guard, but the Air Force PJs remained on board to provide emergency care to the two badly wounded sailors. Working in shifts, the PJs treated the injured men, who sustained burns to more than 50% of their bodies during the explosion and ensuing fire.

It took 24 hours for the Tamar to get within range of a Portuguese helicopter, which flew in and recovered the badly injured crewmen. Three of the pararescuemen boarded the Portuguese rescue chopper with their injured charges, and the four remaining PJs stayed aboard the Tamar with the rest of the crew — they’re still on the vessel now, waiting to dock at the Azores, a string of Portuguese islands in the Atlantic Ocean.

“This is what we train for and our pararescuemen, pilots, crew members and the rest of our team are the best of the best,” Col. Nicholas Broccoli, the 106th Rescue Wing vice commander, said in a statement.