Two American women and their dogs were rescued by the U.S. Navy in the Pacific off Japan last week, following... 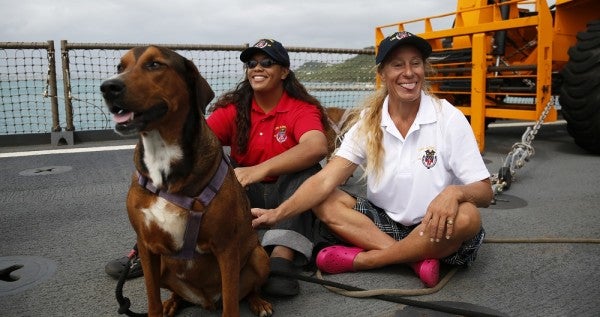 Two American women and their dogs were rescued by the U.S. Navy in the Pacific off Japan last week, following nearly six months lost at sea. But emerging details cast doubt on whether their voyage was a harrowing survival tale in the open ocean or a half-cocked, possibly embellished, misadventure.

The two Honolulu residents, Jennifer Appel and Tasha Fuiava, arrived at White Beach Naval Facility in Okinawa, Japan, Oct. 30 after their rescue four days earlier by USS Ashland, 900 miles southeast of Japan and thousands of miles away from their initial destination — the South Pacific island of Tahiti.

Following a Coast Guard investigation into the sailors’ ordeal, which began when they set sail from Hawaii May 3, the initial portrayal of the voyage — filled with storms, shark attacks, and the breakdown of critical equipment — hasn’t held up well, according to the Associated Press.

The biggest point of contention: The two wayward sailboaters had an emergency beacon, but it was never activated, even though Appel claimed that the pair was in dire straits.

“Had they not been able to locate us, we would have been dead within 24 hours,” Appel said of the Navy rescue at a news conference aboard the USS Ashland after they were rescued on Oct. 26, according to CNN.

Though the women informed the Associated Press they had satellite phones, GPS, radios, and other emergency gear — in total, six forms of communication, that they said all failed to work — they failed to mention that they also had an Emergency Position Indicating Radio Beacon (EPIRB). An EPIRB is designed to activate a steady homing signal when it’s activated, either by hand or by being overturned in the water in an incident at sea.

Related: Navy Amphib Saves Boaters (And Their Dogs) Who Were Lost At Sea For 6 Months »

“If the thing was operational and it was turned on, a signal should have been received very, very quickly that this vessel was in distress,” Phillip R. Johnson, a retired Coast Guard officer responsible for search and rescue operations, told CBS News.

When asked about the EPIRB — which communicates with satellites and sends a location to rescuers within minutes of its activation — Appel told the AP that in her experience, the beacon should only be used when you are in imminent danger, a statement which runs counter to her initial claim that the pair “would have been dead within 24 hours,” had the USS Ashland not intervened.

“Our hull was solid, we were floating, we had food, we had water, and we had limited maneuverable capacity,” Appel said in an interview in Japan on Oct. 30. “All those things did not say we are going to die. All that said, it's going to take us a whole lot longer to get where we're going.”

There are other details, beyond the omission of the emergency beacon and concerns about why it wasn’t used, that call the initial account of the dramatic voyage into question.

The two women, who met in late 2016, decided to make the voyage together even though Fuiava had no experience sailing. The plan was to sail to Tahiti over the course of 18 days, then travel the South Pacific before returning to Hawaii in October.

When the pair set out on May 3, the two women said they ran into a violent storm off the island of Oahu that lasted three days and slammed their 50-foot sailboat — dubbed the Sea Nymph — with 60 miles-per-hour winds, and 30-foot swells.

Accounts from meteorologists interviewed by the Associated Press and archived NASA satellite images indicate that there was no severe weather around Hawaii that day.

Additionally, Appel and Fuiava’s claim that they considered returning to port following the purported storm — which left their mast and rigging unusable and forced the pair to rely on their shipboard motor — is fraught with inconsistencies, the AP reports:

The pair said they thought about turning back, but the islands of Maui and Lanai didn't have harbors deep enough to accommodate their sailboat. At 50 feet (15 meters) long, the vessel is relatively small, and both islands have harbors that would have accommodated them. Plus, the Big Island — the southernmost island in state — has several places to dock.

These discrepancies — plus statements out of whack with the “basic geography of the Pacific Ocean,” as the AP notes — raise the question of whether Appel and Fuiava could have done more to avoid disaster.

Instead of stopping to seek help, they set a new course for the Cook Islands, 1,000 miles away from their original destination of Tahiti, before another storm struck, killing their engine by the end of May, the AP reports. However, when a vessel identified as the Sea Nymph was contacted by the Coast Guard in June, the captain said they were not in distress and expected to make landfall within a day.

Four months later, the Sea Nymph’s crew, and their dogs, were picked up by the Navy’s USS Ashland, and all were reported to be in good health.