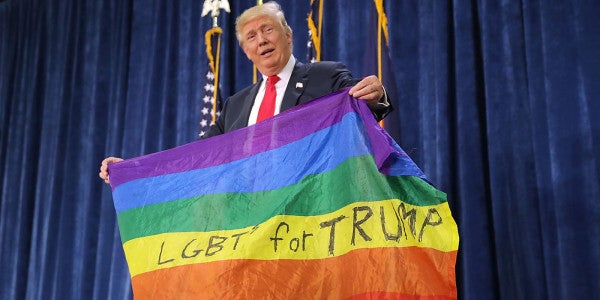 A federal judge has blocked parts of President Donald Trump's presidential memo banning transgender Americans from military service, setting up a court dispute that the White House and its critics could possibly pursue to the Supreme Court.

Colleen Kollar-Kotelly, a judge with the U.S. District Court for the District of Columbia, partially granted a request by pro-LGBT petitioners for an injunction against Trump's transgender ban Oct. 30.

The effect of the court order, Kollar-Kotelly wrote, “is to revert to the status quo with regard to accession and retention that existed before the issuance of the Presidential Memorandum.” In practical terms, that means the military will go back to the rules permitting transgender service adopted in June 2016 by then-Defense Secretary Ash Carter and updated by current Secretary of Defense James Mattis last summer.

Trump caused waves last July when, in the middle of a methodical review by Mattis and DoD of the Pentagon's transgender policies, he tweeted that he was barring transgender people from serving in the armed forces. Those tweets left the military and lawmakers baffled, and Mattis reportedly “appalled”But the White House quickly issued a presidential memorandum ordering the federal government to carry out a transgender ban.

That led to a lawsuit filed on behalf of five current transgender service members, who allege that Trump's policy was an unconstitutional violation of their due process rights. Kollar-Kotelly ruled with them Monday, agreeing that the Trump ban needed to be halted until at least November 10, when both sides in the lawsuit are expected to inform the court how they plan to proceed.

There was no immediate indication of how the White House would proceed in the case by publication time Monday, an otherwise busy day for the administration on unrelated matters.