The Trump administration is requesting more time to appeal a judge’s block on President Donald Trump’s plan to bar transgender... 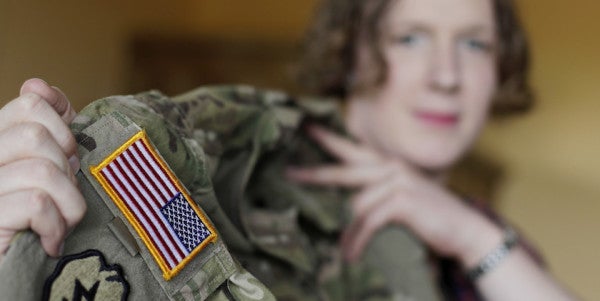 The Trump administration is requesting more time to appeal a judge’s block on President Donald Trump’s plan to bar transgender people from military service, the Associated Press reports. If the request is denied, there’s a good chance transgender people will be allowed to enlist in the military and serve openly beginning Jan. 1, 2018.

In October, U.S. District Judge Colleen Kollar-Kotelly ordered the military to open its ranks to transgender troops on Jan. 1 after she concluded that a lawsuit filed against the ban would easily prevail and issued a preliminary injunction, according to The Washington Post.

On Nov. 28, Kollar-Kotelly denied a motion from the administration requesting that the deadline be delayed. Government lawyers then turned to the U.S. Court of Appeals, asking a judge on Dec. 7 to temporarily hold the Jan. 1 requirement until their appeal is resolved.

President Donald Trump announced his proposal to bar transgender people from serving in the military via Twitter on July 26, saying that the ban was necessary to ensure the armed forces remained “focused on decisive and overwhelming victory,” citing “tremendous medical costs” and “disruption that transgender in the military would entail” as justifications.

The tweets were followed by a presidential directive to prohibit military recruitment of transgender people and force those already serving out of the armed forces. The plan, set to take effect in March 2018, drew backlash from Democrats and civil rights groups, and, in August, the American Civil Liberties Union filed a lawsuit on behalf of six transgender active-duty troops, arguing that the ban violated their Fifth Amendment Rights to equal protection.

Kollar-Kotelly ruled in favor of the ACLU on Oct. 30, stating that the Trump administration’s policy “does not appear to be supported by facts.” As The Washington Post notes, the injunction — which will hold until the lawsuit is resolved or dismissed — “effectively reverts Trump’s policy to the one issued under” President Barack Obama’s administration.

“There is absolutely no support for the claim that the ongoing service of transgender people would have any negative effect on the military at all,” Kollar-Kotelly said in the preliminary injunction. “In fact, there is considerable evidence that it is the discharge and banning of such individuals that would have such effects.”

In June 2016, Obama allowed transgender troops to serve openly and receive related medical treatment and also ordered the Pentagon to establish a policy for allowing transgender people to enlist within a year. The decision was made after a Pentagon-commissioned study concluded that transgender troops would have “little impact” on military operations, according to The Washington Post.

The Obama administration’s timeline was extended earlier this year by Secretary of Defense James Mattis, who said the Pentagon needed until Jan. 1 to evaluate how recruiting transgender troops would impact “readiness and cohesion.” In August, after Trump announced his intent to reverse Obama’s decision, Mattis formed a panel of experts to review the policy and come up with recommendations for how best to implement the new plan. He was given a Feb. 21 deadline.

The Department of Justice highlighted the Pentagon’s ongoing review of the policy in a statement released after Kollar-Kotelly’s October ruling.

The Associated Press reports that the government has asked that the judge decide whether or not to approve the deadline extension by Dec. 11. Meanwhile, the military is “taking steps to be prepared” for accepting transgender recruits on Jan. 1, a Pentagon spokesman told The Washington Post on Dec. 6.