Jocko Willink led SEAL Team 3’s Task Unit Bruiser in Iraq during the 2006 Battle of Ramadi, before retiring from... 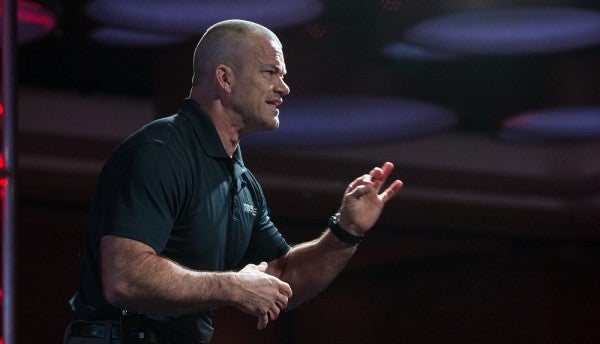 Jocko Willink led SEAL Team 3’s Task Unit Bruiser in Iraq during the 2006 Battle of Ramadi, before retiring from the military as a commander in 2010 after 20 years of service. Since then, he's earned his keep as a motivational speaker, host of a self-named podcast, a nonfiction author whose third book, Discipline Equals Freedom, went on sale Oct. 17.

Willink’s 200-page field manual is a steady diet of bite-sized axioms on leadership, nutrition, fitness, combat, and the dangers of donuts.

“I think this is a book that will help people on a day-to-day basis as they run into the normal challenges that people run into in life,” the 46-year-old Willink told Task & Purpose. “Whether it’s wanting to eat crappy food, or wanting to avoid doing work that they have to do.”

This isn’t a self-help book — at least, not your typical self-help book. It has a distinctly military flavor; it even includes a brief rundown of the service’s firearms safety rules, which boils down to: only point your weapon at someone you intend to shoot, and keep your finger straight and off the trigger, and the weapon on safe until you intend to fire. Sometimes summed up as Treat, Never, Keep, Keep. You won’t find any gentle words of encouragement telling you that close is good enough: Instead, there’s a different no-nonsense passage splattered across every other page in bold black and white print.

Consider “Sugar Coated Lies,” a short section on the evils of donuts. “Yes, I know. I know those donuts are tempting. All those colorful sprinkles. The cream filling. The Glaze! The Glorious Glaze!” Willink writes, exhorting readers not to reward the well-intentioned coworker brings in a box of baked goodies for team morale. “These donuts aren’t food. THEY ARE POISON,” he warns, in all caps, so you know it’s serious.

Related: Legendary Navy SEAL On What It Really Takes To Crush ISIS »

While Discipline Equals Freedom is heavy on nutritional guidance and healthy-living tips — Willink is a fan of paleo-style diets and power naps — the book centers around the mundane but significant choices we make each day, like the decision to wake up and PT instead snuggling your woobie for a few minutes more.

“The most important thing to do is wake up early and get some kind of workout going on,” Willink told Task & Purpose. “If you get out of bed and start making things happen, you’ll always have a better day.”

Perhaps the biggest takeaways in Discipline Equals Freedom come when Willink departs from the balls-out, all-caps tone and waxes philosophical about leadership, personal drive, and remaining optimistic — pragmatically, though.

“How do I deal with setbacks, failures, delays, defeat or other disasters? I actually have a fairly simple way of dealing with these situations, summed up in one word: ‘Good,’” Willink writes. “Oh, mission got canceled? Good. We can focus on another one. Didn’t get the new high-speed gear we wanted. Good. We can keep it simple. Didn’t get promoted? Good. More time to get better.”

The message is pretty clear: If you’re confronted with a problem, find an opportunity instead. “I think it’s those sorts of things this book will be beneficial to the people that get it,” Willink said. “It’ll keep them on the path they need to be on to make their lives better.”