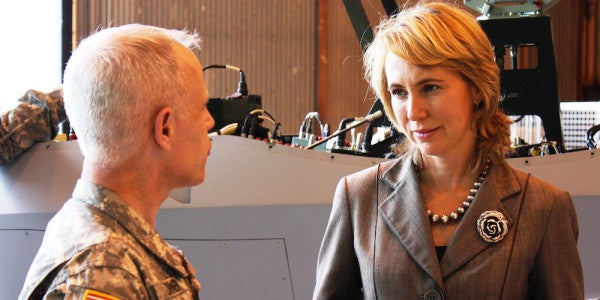 During one of my 2008 deployments in southern Afghanistan, we learned that we were slated to have a visit from a congressional delegation. This news cheered me not at all, because I tended to be cynical with regard to politicians.

Especially galling, for all of us, was having to get gussied up for alleged dignitaries and don uniforms that featured, of all things, name tags. It felt infantile, and tied to a world of shiny badges and passes that we didn’t care for. We were briefed on the sparkling itinerary, which would involve going to a room, sitting, listening, and then maybe answering some questions about what was happening on the ground.

Name tags, for Christ’s sake. Not unlike show-and-tell day for third graders.

When the House Armed Services Committee delegation came in, a young woman wearing jeans and a long-sleeve T-shirt stood out. This was Gabby Giffords. She looked like she could have been one of our intel people, a resemblance that we were not expecting. For such an august personage, she mostly had an air about her that seemed to announce how down to earth she was.

When she looked at our gear, what struck me was that she did so for the right reasons. Not to gee-whiz about our equipment, but to make sure we had what we needed.

She asked smart questions. She was warm and friendly. I gravitated to her, and was listening in as she told us where her district was. It occurred to me that a part of the state she represented happened to be near a corner where we sometimes trained. So, being a smart-ass, I went to one of the other shooters who had a K9 assigned to him, grabbed the leash, and used the K9 to introduce myself to Gabby. I said, “Why don’t you come train with us?” She replied, “OK,” and gave me her card.

That’s that, I figured. Wrongly.

We finished the 2008 deployment, went home, and promptly started up our training cycle, which involved a stint near Gabby’s state. Always eager to call everyone’s bluff, I referenced her business card and rang her up.

She answered the phone. I said I’d be near her district on a certain set of dates and asked if, while I was there, she’d like to skydive. She said yes and assured me that she would make it happen. We worked it out that we’d do a Saturday morning jump, beginning the day with a meet-up at a certain restaurant for breakfast, and then driving together out to the remote training site to conduct the jump.

When the Saturday morning came, I arrived early at the restaurant with Bestseller. We were anticipating a posse of uptight slicksters in button-down collars. Instead, in walked Gabby, in jeans, tennis shoes, and a sweatshirt—which seemed to be a bit of a uniform with her. She grabbed a seat, and we chatted. A political issue surfaced regarding something that was hampering our work slightly. She filed it away, and later handled it. Finishing our southwestern-style amalgams of beans, peppers, eggs and other savory a.m. options, we left and got in the car.

Bestseller drove. I rode shotgun. Gabby sat in back. As we headed to the training site, our conversation meandered. Don’t Ask, Don’t Tell came up. She asked our feelings on the subject. Bestseller said that, for his part, he was a staunch believer in Live and Let Live, but he did have to admit that he had mixed feelings about being in a shower with a gay fellow. It was a sentiment that had an economic fallout, he realized, because the military would be saddled with the costs of creating partitioned showers.

My turn. I said I really didn’t care if there were gay fellows in my unit, or in the shower. Bestseller laughed, looking forward, as my buddies often did, to the entertainment value inherent in my rationale for things. Soberly, I turned to Gabby and explained that, as a general principle, if someone is looking at me in the shower, I’m flattered, and it doesn’t matter what gender they are. I gratefully accept the attention. We got to the training site. Some of our buddies were there, along with an air crew. Seeing them, Gabby pulled me aside and asked where the air crew was from. “I want to be able to thank them properly,” she said. A short while later, when it came time for her to get her kit on, she indicated that she’d like to have “some cammies, like you guys have.”

Seven men immediately started ripping their clothes off and proffering their camo, in order to accommodate the congresswoman’s request.

But despite the flurry of pants and shirts, she was hard pressed to find anything that fit her, because she was much smaller than the seven stripped-down gents. Fortunately, there was one compact gent whose duds came closest, although they were still oversized on her. They’d do, though. She eagerly accepted them. And now that she was more appropriately accoutered, she donned the rest of her equipment and a frap hat—a little ribbed, padded cap that was basically useless but required by the military.

During the jump, the most important thing she was going to be strapped to was me. And I let her know this fact, in no uncertain terms, during my brief. I got chided about my brief afterward, because it was extremely detailed, and some surmised that I might have pontificated a little excessively, in order to give Gabby an inflated sense of my importance in the upcoming proceedings. It was a fair critique.

When we got on the airplane, with engines running, but still earthbound, she walked around and thanked everyone. Then we sat down, affixed seat belts, and let the plane climb to altitude.

It was time to go. She got up, and all the guys gave her a little high five. She was absolutely unafraid. Not intimidated at all. I think it had to do with her rugged upbringing. She’d told me on the way up to altitude that she used to race motorcycles and jump horses. Strapped together for our tandem jump—with my front attached to her back—we approached the rear door of the C-130, which opened, revealing a beautiful view of the desert below.

We did a backflip out of the plane, and she was smiling ear to ear (I later confirmed this visually, in photographs). The free fall was good, although she hooked her legs through mine like an MMA fighter because she thought she was going to fall off of me. Embarrassingly, it wasn’t her form but mine that merited censure. I think because I was slightly nervous about the high-profile jump, I forgot one of the tandem procedures—tapping her shoulder, which would have meant “bring your arms out.”

I had given an overly long oration on procedures, as a display of my mastery of them, only to forget one of the most important ones.

At the appropriate altitude, I got things sorted out, and it was time to deploy the parachute, which in this case had an especially large wingspan—and a generally heavy-duty quality—because it was designed to handle two bodies. With feet dangling and bodies floating, I turned the parachute in the direction of the tract of land Gabby represented, so that our windward movement was toward her constituency, and said, “It’s pretty, isn’t it?” She agreed that yes, her home state was beautiful. Under canopy, two attached humans can hear each other. It’s not so windy that voices are drowned out.

We landed uneventfully, right where we were supposed to.

After I’d privately said Thank God for our good landing, Gabby then publicly thanked everybody else, changed back into her civilian clothes, and took her leave, saying she had to go meet with students applying to military academies. Most people go drink a beer and kick back after a Saturday jump, but Gabby was just starting her day.

That woman worked hard. She changed my whole view of politics. Later that summer, after hosting various town hall meetings that featured screaming matches and arguments over health-care reform, she and I spoke, and she mentioned that people were really acting wildly. “I’m afraid,” she said, “that some crazy person is going to shoot me in the face.”

When people ask me who my heroes are, I always mention Gabby Giffords. I was shot in the leg. Gabby was shot in the head. I suffered my wounds poorly and sat in a hospital feeling sorry for myself. Not Gabby. She was a machine of positivity and strength. She was the anti-me.

During the afternoon, I was able to sit with her at a table, at which point I pulled out the letter I’d written. It was an award citation letter, describing her grit, based on my own personal feelings about what she’d gone through and what she was now doing. I read it aloud, and then gave it to her, along with my medals. Another vet had already dropped off a Purple Heart, anonymously. But I wanted her to have mine, too. She smiled at me and seemed happy. Beyond that, it was hard to read her emotions, because there was so much swelling on her face. I do remember looking at her intently and thinking, Gabby, this is good for you, and then quickly getting the sense that she was probably thinking the same thing about me.

Because I was now quite close to her, in terms of physical space, I noticed the bracelet on her wrist. There was a “W” on it. I grabbed it, pointed to it, and asked, “What does this represent?” She looked at me like I was crazy and said, “Wonder Woman.” Of course.