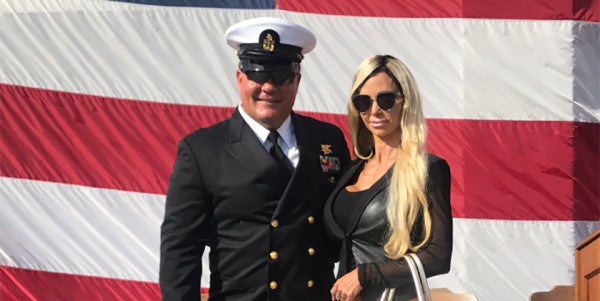 That’s the claim of the wife of Joseph John Schmidt III — by day, a decorated Navy SEAL with 23 years of service, by night an adult film star named “Jay Voom.”

Schmidt’s wife — an adult film actress known in the sex-film biz as “Jewels Jade,” who says she pulled her beau into the biz — spoke exclusively with Militaryoneclick.com for an interview published April 20.

“Quite honestly, a lot of our friends are divorced,” Jade told the site. “But we’re still married, even with all the stress, even with my crazy occupation and his crazy occupation. I think it’s because of our communication and because we have a lot in common.”

The pair’s porn-stardom began following a string of financial woes in 2008. Hoping to cash in on the real estate boom, they bought up property, but quickly lost more than they took in when the markets crashed.

“My tattoos are recognizable, my voice is recognizable,” she said. “Everything about me is recognizable. I've done over 300 films. I can't just get a normal job anymore. I'm trapped. That's the thing people don't realize before they get into this industry.”

In time, Schmidt — who was reportedly making $60,000 as a special operator — joined her on screen and starred in 29 films.

For a while, it seemed to work. But just eight months before he was set to retire from the Navy, news of Schmidt’s double life as “Jay Voom” came to light, prompting an investigation that’s put his retirement pension in jeopardy.

Throughout all of this, the couple has remained together for 13 years.

“You know, it’s been as difficult as people probably would guess,” Jade said. “We’ve had jealousy and lots of fighting about it. Really, it took Jay actually being on set and in a film himself to understand that I’m just doing a job.”