Self-described American patriot and former Navy SEAL Carl Higbie, who is perhaps best known for getting fired from the Trump administration because he said racist shit on the radio, wants you to know that he went to war to defend everyone's dreams. 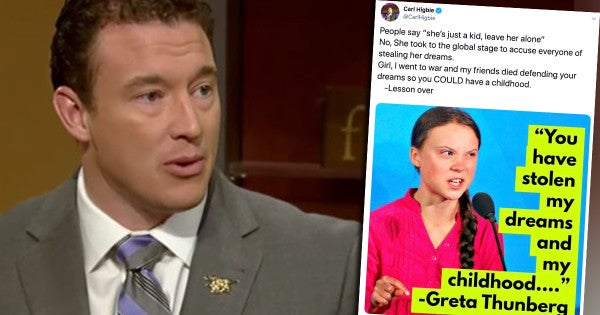 Self-described American patriot and former Navy SEAL Carl Higbie, perhaps best known for resigning from the Trump administration after it was learned he said racist shit on the radio, wants you to know that he went to war to defend everyone's dreams.

Thank you for your service, Carl.

In a tweet on Tuesday, Higbie shared an image of 16-year-old Swedish activist Greta Thunberg — who delivered a scathing speech on climate change to world leaders at the United Nations on Monday — and then vet-splained that he “went to war and my friends died defending your dreams so you COULD have a childhood.”

People say “she’s just a kid, leave her alone”
No, She took to the global stage to accuse everyone of stealing her dreams.
Girl, I went to war and my friends died defending your dreams so you COULD have a childhood.
-Lesson over pic.twitter.com/OCZE43pj4A

In case you missed it in the previous paragraph, Thunberg is from Sweden (That's a country in Europe that has not yet been purchased by the United States).

In a follow-up tweet, he mentioned the Navy's recruiting slogan of “a global force for good.” Checkmate, libs. Navy SEALs defend the entire world's dreams.

As Higbie notes in his Twitter bio, no one should try to “out American ,” since he's a gun-toting, flag waving, meat-eating Navy SEAL, so I won't. He's clearly more American than anyone.

But is there anything more annoying than a veteran noting they went to war before mentioning something unrelated? Then again, I always tell my kids that I didn't go to war so they could leave their goddamn toys all over the house.

Son, have you ever heard of Afghanistan?

If they ever do a remake of The Big Lebowski, we can only hope and pray that Higbie plays the part of Walter Sobchak. He'd be an absolute shoe-in.

someone come get their boot

Enroll in some yoga classes because you stretch this far, Carl. You’re likely to pull something.

Also, looking forward to you – the decorated Swedish military veteran – presenting this young, global leader with her future Nobel Peace Prize. Beyond exciting.

~popular_source-pageview
Carl Higbie
navy seal
thank you for your service