"I am in no hurry, our Military is rebuilt, new, and ready to go, by far the best in the world." 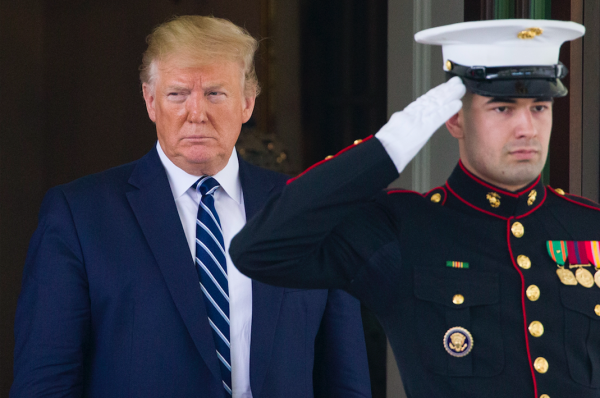 President Donald Trump confirmed in a series of tweets on Friday morning that the U.S. was minutes away from striking three Iranian targets on Thursday night before he called off the attack

The U.S. was “cocked & loaded” to retaliate against Iran's shoot-down of a Navy RQ-4 Global Hawk — a multi-million dollar surveillance drone — on Wednesday night, Trump tweeted.

….On Monday they shot down an unmanned drone flying in International Waters. We were cocked & loaded to retaliate last night on 3 different sights when I asked, how many will die. 150 people, sir, was the answer from a General. 10 minutes before the strike I stopped it, not….

The unmanned aerial vehicle was shot down over international waters, the Pentagon maintained, though Iran claimed it was shot down in their airspace.

Trump said that he asked how many people would die in the retaliatory strike, to which a general answered 150.

“10 minutes before the strike I stopped it, not proportionate to shooting down an unmanned drone,” Trump tweeted. “I am in no hurry, our Military is rebuilt, new, and ready to go, by far the best in the world.”

….proportionate to shooting down an unmanned drone. I am in no hurry, our Military is rebuilt, new, and ready to go, by far the best in the world. Sanctions are biting & more added last night. Iran can NEVER have Nuclear Weapons, not against the USA, and not against the WORLD!

It's unclear who the general is that the president was referring to.

Trump also said that more sanctions were added to Iran on Thursday night, though none were announced by the Treasury Department at the time of publication.

The New York Times reported Trump's reversal of course on Thursday night, saying that as late as 7 p.m., “military and diplomatic officials were expecting a strike.”

“Planes were in the air and ships were in position, but no missiles had been fired when word came to stand down,” the Times reported.

The escalation comes at an uncertain time for the Defense Department. Acting Secretary of Defense Patrick Shanahan on Tuesday announced that he'd be withdrawing his nomination to be the permanent head of the Pentagon.

Trump had named Army Secretary Mark Esper as the new acting secretary, though he doesn't start the job until Monday.

Washington was holding its breath for much of the day on Thursday as key lawmakers gathered with the president, Esper, Secretary of State Mike Pompeo, and Trump's national security adviser John Bolton at the White House to discuss the situation.

Trump had previously addressed the downing of the drone while meeting with Canadian Prime Minister Justin Trudeau, telling reporters he found it “hard to believe that it was intentional,” and was probably done by someone “loose and stupid” in Iran.

The New York Times reported that Bolton, Pompeo, and CIA Director Gina Haspel “favored a military response” to Iran; Sen. Lindsey Graham (R-S.C.) appeared to be pushing for military action as well, tweeting on Thursday that there are “seldom good choices” in the Middle East, though “'inaction' in the face of evil and provocation ultimately has its own cost.”

Democrats, however, demanded Congressional oversight; Senate Minority Leader Chuck Schumer said there was concern that Trump would “bumble into a war.”

For the time being, things seem to have at least taken a pause; Trump said he is “in no hurry.” But if there's anything we've learned in the last few years, it's that things can change at the drop of a hat — or, rather, the send of a tweet.

SEE ALSO: As The US Sends 1,000 More Troops To Middle East, The Pentagon Is A Rudderless Ship Caught In A Storm

WATCH NEXT: Smoke Trail From Shot Down Global Hawk