"This was an unprovoked attack on a U.S. surveillance asset in international airspace" 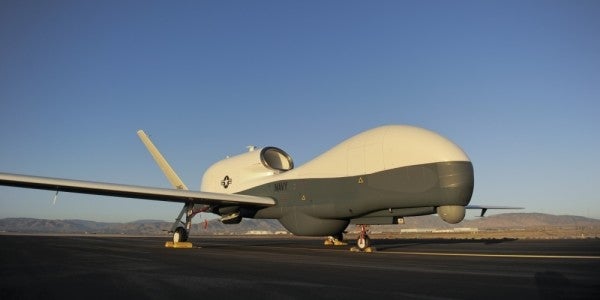 The Iranians just blasted one of the US military's most sophisticated and expensive drones out of the sky as tensions in the Strait of Hormuz reach the boiling point.

A Navy RQ-4 Global Hawk was shot down by an Iranian Revolutionary Guards Corps missile around 11:35 pm Greenwich Mean Time on Wednesday as it flew over international waters roughly 34 kilometers off the Iranian coast, defense officials said.

Iranian claims that the drone was over Iran at the time are “categorically false,” he continued. The Global Hawk went down in international waters.

“This was an unprovoked attack on a U.S. surveillance asset that had not violated Iranian airspace at any time during its mission,” Guastella said. “This dangerous and escalatory attack was irresponsible and occurred in the vicinity of established air corridors between Dubai, UAE, and Muscat Oman, possibly endangering innocent civilians.”

To put things into perspective, the Global Hawk is meant to conduct surveillance at very high altitudes. It can fly for more than 30 hours at 60,000 feet, according to Northrop Grumman, which makes the aircraft. The Pentagon expects that Global Hawks will eventually replace manned U-2 Dragon Lady spy planes.

Despite the Global Hawk's impressive capabilities, it would be wrong to assume that Iranian air defenses are more lethal than the U.S. military had expected, said retired Air Force Maj. Gen. James Poss.

Global Hawks are large aircraft and this drone was flying in a peacetime environment so it likely had no defensive systems, said Poss, now CEO of ISR Ideas, a consulting firm.

“If we were to employ that in combat: A. The missile launchers would have never been there; and B. There would have been a whole other range of things that we would have done to defend that aircraft,” Poss told Task & Purpose on Thursday. “Shooting down a surveillance aircraft in peacetime in international waters is not a statement about the sophistication of your air defenses – it's a statement about your judgment, or lack thereof.”

This is the third time in a month that Iranians or their proxies have taken a shot at a U.S. military drone.

CENTCOM claims that Houthi rebels in Yemen shot down an MQ-9 Reaper on June 6 with Iranian assistance, and the Iranians attempted to destroy another Reaper over the Gulf of Oman a week later, but their surface-to-air-missile missed.

President Donald Trump told reporters on Thursday that he believed an Iranian commander “made a mistake” in ordering the Global Hawk shot down.

“I find it hard to believe it was intentional, if you want to know the truth,” Trump said at the White House. “I think that it could have been somebody who was loose and stupid that did it. We'll be able to report back and you'll understand exactly what happened, but it was a very foolish move.”

Trump also said that no one his administration is trying to push him into a conflict with Iran. In fact, his advisors often urge him to show caution.

“But this a new wrinkle; this is a new fly in the ointment, what happened shooting down the drone,” Trump said. “This country will not stand for it. That I can tell you.”

“A U.S. Navy RQ-4 was flying over the Gulf of Oman and the Strait of Hormuz on a surveillance mission in international airspace in the vicinity of recent IRGC maritime attacks when it was shot down by an IRGC surface to air missile fired from a location in the vicinity of Goruk, Iran.

“This was an unprovoked attack on a U.S. surveillance asset that had not violated Iranian airspace at any time during its mission.
This attack is an attempt to disrupt our ability to monitor the area following recent threats to international shipping and free flow of commerce.

“Iranian reports that this aircraft was shot down over Iran are categorically false.

“The aircraft was over the Strait of Hormuz and fell into international waters.

“At the time of the intercept, the RQ-4 was operating at high-altitude approximately 34 kilometers from the nearest point of land on the Iranian coast.

“This dangerous and escalatory attack was irresponsible and occurred in the vicinity of established air corridors between Dubai, UAE, and Muscat Oman, possibly endangering innocent civilians.”

SEE ALSO: Trump: I'm Not Sure I'd Go To War With Iran Over Oil