Have no fear: the Reaper is here 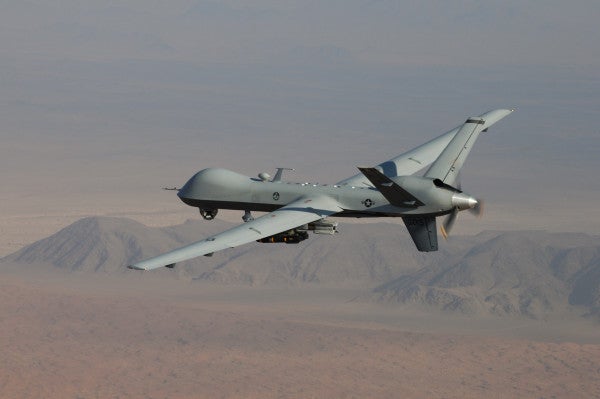 Have no fear: the Reaper is here — and, for the first time, in the hands of Marine operators.

Although the announcement didn't specify where the MQ-9 provided “crucial support” for Marine forward operations downrange, the mission likely occurred in Afghanistan's Helmand province, where the Corps has sought to urgently deploy contractor-owned, contractor-operated (COCO) Reapers in recent years.

Indeed, the Genera Atomics statement notes that the achievement by a Marine Corps crew “comes shortly after surpassing 7,000 hours of COCO flight operations since September 2018,” just months after the Navy awarded the General Atomics a $39.5 million contract for Reapers to keep tabs on a Marine task force in the country.

“This achievement represents a unique milestone and example of the Marine Corps’ legacy of innovation,” General Atomics Aeronautical Systems president David R. Alexander said in the statement. “As a partner with the Marine Corps, we look forward to expanding the role of Medium-altitude, Long-endurance (MALE) UAS in support of maritime littoral missions.”

The Corps has been working with the Air Force since at least June 2018 to put its VMU crews through training on what are known as Group 5 UAVs (or drones maximum takeoff weight of 1,320 pounds, per The War Zone), a category which includes the Reaper, the RQ-4 Global Hawk, and the MQ-4C Triton.

As USNI News reported at the time, the Corps was in the early stage of developing an Marine Air-Ground Task Force (MAGTF) Unmanned Aerial System (UAS) Expeditionary (or MUX, obviously) that would be “a similar size to the Reaper but would operate off amphibious and other ships and expeditionary fields without a runway.”

This training is all part of a broader effort within the Corps to acquire and field its own fleet of Reaper drones, with VMU-1 currently acting as a “test bed and incubator” to aid in the Corps in its efforts to successfully develop that MUX capability, according to the General Atomics statement.

The Navy's fiscal year 2020 budget request included $77 million to support the purchase of three Reapers, although lawmakers only ended up allocating $53.108 million to the service to procure just two MQ-9s at a flyaway cost of $23.7 million apiece, according to budget documents.