The Marine Corps’ first new amphibious vehicle since Vietnam is almost here. Here’s who will get them first

Marines with the I Marine Expeditionary Force will be the first to receive the Corps's first new amphibious vehicle since Vietnam, Task & Purpose has learned 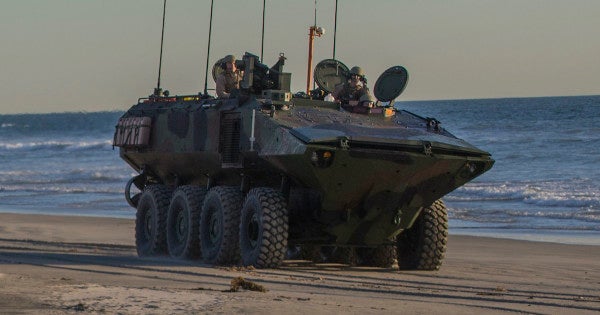 Marines with the I Marine Expeditionary Force will be the first to receive the Corps's first new amphibious vehicle since Vietnam, Task & Purpose has learned.

The I MEF, which includes the 1st Marine Division, will first receive the new Amphibious Combat Vehicle in the fourth quarter of fiscal year 2020, according to Ashley Calingo, a spokeswoman for Marine Corps Systems Command.

The ACV is intended to eventually replace the older Amphibious Assault Vehicle that's been in use since the 1970s.

As Marine Corps Times noted this past January, the service is angling to initiate full production of some 704 ACVs by 2022 at the earliest in a deal that would total upwards of $1.2 billion.

Calingo could not specify if any specific regiment was set to receive the new ACV first, stating only that ACV program personnel “are working diligently with I MEF to coordinate further details on the plan and schedule.”