Soldiers are finally getting a robot mule that can haul 1,000 pounds of gear 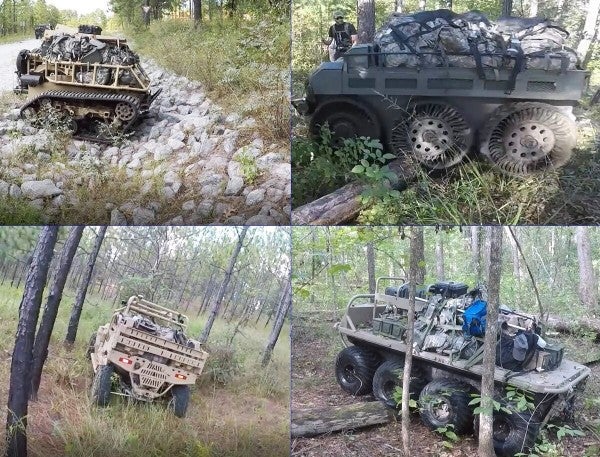 The Army is poised to award a contract this month to produce hundreds of robotic mules to tackle the scourge of hauling tons of gear and other bullshit downrange, the service announced last week.

The service will award a contract to one of four defense contractors — General Dynamics Land Systems, Textron subsidiary Howe & Howe, a team of Applied Research Associates and Polaris Defense, and HDT Expeditionary Systems — to produce its tracked Small Multipurpose Equipment Transport (SMET) planned to be fielded some time in fiscal year 2021.

Each SMET will haul 1,000 pounds, operate over 60 miles in a three-day period, and generate a kilowatt when moving and 3 kilowatts when stationary to recharge both its batteries and assorted equipment, according to the Army.

According to the Army, soldier feedback led to “increasing the S-MET’s carrying capacity and mobility, creating alternative methods for casualty evacuation and robotic obscuration, as well as reducing its noise.”

While the Army initially awarded a $162 million contract to GDLS in November, the service in February opted to allow the four contractors to recompete for the privilege of building the mule, after Textron protested to the Government Accountability Office.

Tetron claimed that GDLS “had been allowed to change its vehicle significantly following a soldier evaluation phase, which made the evaluation invalid even though an award was contingent on such an assessment from users,” Defense News reported.

While the SMET program was initiated under a directed requirement in April 2017, the Defense Department has been eyeing plans for a robotic pack mules for the better part of the last decade.

In 2015, the Marine Corps decided to shelve plans to field a Legged Squad Support System robot mule after the $42 million, two-and-a-half year development effort between the Defense Advanced Research Projects Agency (DARPA) and Boston Dynamics yielded a prototype that was simply too noisy for operational use.

While it's unclear if noise is a major issue with the existing tracked SMET effort, one other major question remains: With U.S. troops hauling hundreds of pounds of gear downrange, what happens when this robotic bad boy happens to break down during a march?