The Marine Corps is looking for a few good amphibious combat vehicles ahead of the next big war. 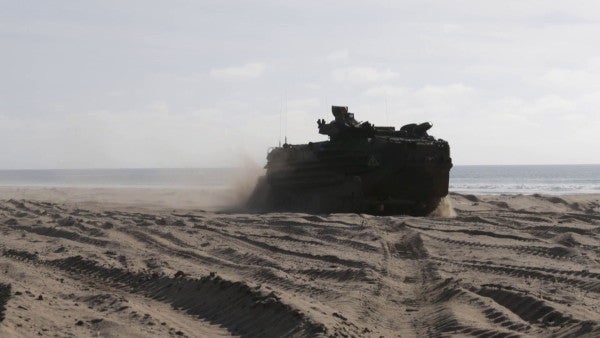 The Marine Corps is looking for a few good amphibious combat vehicles ahead of the next big war.

But while the Marine Corps selected BAE System in June 2018 to actually produce the basic personnel carrier ACV, the RFI is for three specific mission role variants: a command vehicle (ACV-C), a recovery-maintenance vehicle, (ACV-R) and an up-gunned ACV with a deliciously aggressive 30mm medium caliber cannon (ACV-30).

The addition of the 30mm cannon represents a nice boost in firepower. As Marine Corps Times notes; “The older AAV had space for a 40mm grenade launcher, but in direct vehicle-on-vehicle fighting the 30mm cannon offers fast, high-volume direct fire.”

But the 30mm cannon also has applications beyond direct fire. At the end of 2017, the Army adopted and deployed Stryker infantry combat vehicles outfitted with 30mm autocannons to eastern Europe in anticipation of a potential clash with Russia. Those 30mm cannons weren't adopted explicitly for direct fire, but as part of a larger return to Cold War-era short-range air defense systems in anticipation of incoming aerial threats from missiles to drones.

Those are threats that the Marine Corps will almost certainly face during a future amphibious assault. Indeed, service leaders attending the Surface Navy Association's annual national symposium earlier in January stated that the Pentagon needed to boost firepower on amphibious vessels in anticipation of a chaotic assault on, say, the man-made fortresses that China's been standing up across the South China Sea.

“Every ship has to be a warship that can defend itself, have an offensive striking capability and be able to deal with the threats that are coming in, be it a cyber threat – so it needs a good network – or whether it's a kinetic threat in the form of a missile that's coming at it,” Lt. Gen. Brian Beaudreault, deputy commandant of the Marine Corps for plans, policies and operations, said at the SNA symposium, per USNI News.

Whether the Corps will actually have those upgunned ACVs on hand an amphibious assault remains to be seen. Marine Corps Times notes that BAE plans on producing some 30 vehicles by summer 2019, with full production of some 704 ACVs by 2022 at the earliest.

SEE ALSO: The Army's Badass New Stryker Fighting Vehicles Are Ready For Their Close Up