What’s cooler than a Stryker armored fighting vehicle with a 30mm cannon? How about a Stryker with a 40mm cannon?... 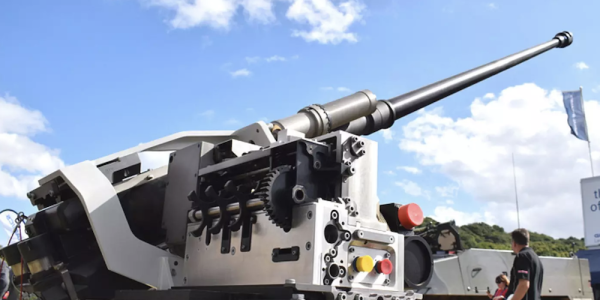 What’s cooler than a Stryker armored fighting vehicle with a 30mm cannon? How about a Stryker with a 40mm cannon?

The product of a decadeslong joint venture between BAE and France’s NEXTER Systems, the cannon packs a wallop. The company boasts that the CTC can deliver 200 rounds a minute at an effective range of 1.5 miles, and it’s capable of punching through 8 inches of concrete (and half-inch steel armor) at 1000 meters.

The cannon has already picked up interest abroad: According to The War Zone, the UK and French militaries have already ordered up the weapons system for their newest armored vehicles. But U.S. officials suggest the Army might consider slapping this bad boy on both the Stryker and the Bradley Fighting Vehicle.

“I think there is going to be interest to let [Army Armament Research, Development and Engineering Center] look at the weapon in some more detail,” BAE Systems business development manager Rory Chamberlain told Defense News during the demonstration. “It’s a mature cannon.”

The Army has an incentive to embrace the system. Ever since U.S. Army Europe identified a major-air defense gap in Eastern Europe after Russia’s 2014 annexation of Crimea, the Pentagon has been racing to deploy upgunned combat vehicles to NATO countries, including Stryker dragoons with 30mm cannons. Both Stryker manufacturer General Dynamics Land Systems and BAE’s Bradley showed off new SHORAD systems on the floor of the Association of the U.S. Army’s annual convention in October 2017, including turrets bristling with Hellfire missiles. An additional 40mm cannon doesn’t seem outside the realm of possibility.

But the demonstration also comes at a crucial time for the Army beyond its current Stryker and Bradley upgunning efforts. The branch is currently pushing forward with prototyping for the Next-Generation Combat Vehicle and ongoing emphasis on lethality as a core pillar of the branch’s modernization roadmap. And while BAE has its sights set on the Stryker and Bradley for the moment, nothing says “mature” and “lethal” like 40mm to freedom.