The Association of the U.S. Army’s annual conference in Washington is less of a service branch confab than it is... 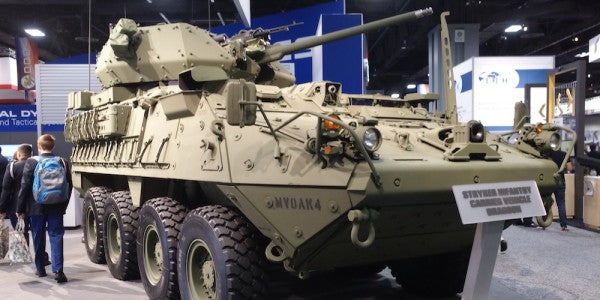 The Association of the U.S. Army’s annual conference in Washington is less of a service branch confab than it is a show-and-tell for the global defense industry: an exposition of gear and vehicles, gun and tanks, that are shaping the future of land warfare. But while Bell Helicopter’s V-280 Valor tiltrotor prototype and a wildly rotating THAAD-style missile launcher dominated the convention center space on Oct. 9, one class of vehicle stood out as the most exciting among rank-and-file soldiers: General Dynamics Land Systems’ brand new Stryker armored fighting vehicles.

While the CROWS-J recently underwent final testing at Aberdeen Proving Ground in Maryland, PEO Soldier spokeswoman Ashley Givens told Task & Purpose that the 30mm is still undergoing testing; with ammo and weapons qualifications near complete, the ICVD is almost ready to see action downrange with the 2nd Cavalry Regiment, which travelled from Vilseck, Germany, to train on the new Strykers at Aberdeen in August.

“The Stryker Lethality ONS effort is way, way ahead of schedule, and the feedback from the 2nd Cavalry Regiment is very positive,” Givens told Task & Purpose. “They see this as a capability that will really add value and help them execute their mission. The soldiers who were were all extremely excited about it.”

The 2nd Cavalry is set to receive the first batch of upgunned ICVDs in January 2018 — 80 with the 30mm cannon and 87 with the CROWS-J Javelin system.

With the General Dynamics’ souped-up new M1A2 SEPv3 Abrams battle tank absent from AUSA’s expo floor, the Stryker ICVD was likely the most appealing of the company’s next-generation fighting vehicles on display in D.C. — save one: the fledgling Stryker Maneuver SHORAD (Short Range Air Defense) Launcher, or Stryker MSL.

The General Dynamics Stryker MSL with Hellfire missiles on the floor of AUSA in Washington, D.C. on Oct. 9, 2017Photo by Jared Keller/Task & Purpose

Engineered as a demonstrator for Army short-range air defense requirements and officially unveiled at the Space & Missile Defense conference in Huntsville, Alabama, in August, this reconfigured Stryker integrates an Avenger launcher turret bristling with an arsenal of AGM-114 Hellfire missiles — the first systematic known application of the traditionally air-to-ground missile system in a fighting vehicle, apart from the occasional jury-rigged Humvee.

In conjunction with the start of the AUSA festivities, General Dynamics released a video of the MSL firing off a salvo of Hellfires in an undisclosed location (perhaps at the White Sands Missile Range in New Mexico, where an Army “shoot-off” was planned for September):

This isn’t the first Stryker prototype to turn an eye upward. The Army’s been testing modified Mobile High Energy Laser (MEHEL) Strykers outfitted with an experimental laser cannon and electronic warfare system designed to disable the increasingly ubiquitous “suicide drones” preferred by ISIS fighters in Iraq and Syria. Taken together, the MEHEL and MSL represent an increasing focus on what the GDLS calls the “new operational dimension” of land warfare: Instead of just drones, the Stryker should prove a formidable foe for “rotary wing, fixed wing and cruise missile” threats, as well.

Although Givens told Task & Purpose that PEO Soldier has yet to determine requirements for SHORAD, it’s likely that the branch, pleased with the impressive 30mm ICVDs, will end up embracing the new anti-air Strykers. Speaking at AUSA on Oct. 9, Army Chief of Staff Gen. Mark Milley emphasized that the land campaigns of the future will rely on units that are “combined arms, multi-domain capable,” no longer dependent on the Air Force or Navy for air superiority.

The General Dynamics Stryker MSL with Hellfire missiles on the floor of AUSA in Washington, D.C. on Oct. 9, 2017Photo via Jared Keller/Task & Purpose

“We will still have to fight and destroy land-based enemy units and seize terrain,” Milley continued, “but the Army… we're going to sink ships. And we're definitely going to have to dominate the airspace above our units from hostile air or missile attack. This is going to require sophisticated air defense capabilities that are not currently in our unit inventories.”

Take one long look at the Stryker MSL, and Milley’s words may take on a new meaning to infantry troops: If it flies, it dies — and we’re going to give you the tools to make that happen.