US Rivals Are Upping Their Missile Game, Fueling Powerful New Threats Against America

The Soviet Union may be gone, but the threat of missile-borne death from above remains: As the Department of Defense... 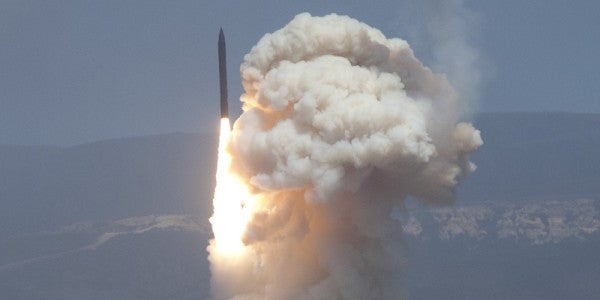 The Soviet Union may be gone, but the threat of missile-borne death from above remains: As the Department of Defense struggles to develop a reliable missile defense shield, a new report reveals that the United States’ traditional foes are producing increasingly deadly and effective weapons.

Iranian, Russian and Chinese weapons developers are all turning out rapidly advancing missile technologies, weapons that “present a significant threat to U.S. and Allied forces overseas, and to the United States and its territories,” according to the Defense Intelligence Ballistic Missile Analysis Committee and reporting by Bloomberg News.

Taken alongside the growing North Korean nuclear threat, the report details an unnerving trend in geostrategic military dynamics: Long-range missiles are growing increasingly more accurate, more diversified, and more difficult to defend against, even for superpowers that shell out hundreds of billions of dollars to counter them.

Authored by officials from the National Air and Space Intelligence Center, the Defense Intelligence Agency, and other agencies, the report states that many aspiring regional and global powers “view ballistic and cruise missile systems as cost-effective weapons and symbols of national power,” an assessment that will come as no surprise to anyone who’s witnessed footage of the phallic monuments to military prowess paraded through the streets of Moscow or Pyongyang. And in pouring money into developing more lethal, wider-reaching missile capabilities, countries including China, Russia and Iran are betting on a simple equation: More power equals more influence at the table of international players.

The news comes amid the realization that the Pentagon is still nowhere near deploying an infallible missile defense shield, despite decades of work and puffed-up rhetoric from politicians in Washington. While there have been notable advances in missile defense technology, current systems continue to come up short, as a failed test on June 21 showed. The test, which featured the SM-3 Block IIA, a missile designed to intercept medium and intermediate-range ballistic missiles, provided one more example of what many in the defense community have long known: knocking down incoming missiles may not be impossible, but it sure isn’t easy.

The development of hypersonic glide vehicles (HGVs) — “a new class of weapon propelled to hypersonic velocity by missile boosters,” as the report describes them — is particularly troubling. The blinding speed and low-flight altitudes of HGVs create added challenges for traditional missile defense systems, raising the stakes in a race to develop effective ways of tracking and, if necessary, knocking down any enemy missile bombardment within an increasingly narrow response window.

The United States’ chief geopolitical rivals are already pursuing HGV tech in a major challenge to the Pentagon’s missile shield capabilities. China has carried out at least seven successful tests of its DF-ZF — an HGV reportedly capable of exceeding Mach 5 speeds (3,836 mph). Russia has also successfully tested its own HGV, firing an SS-19 intercontinental ballistic missile from its Orenburg region in April 2016.

North Korea is also stepping up its ballistic missile development technology. Pyongyang has carried out 10 missile tests in 2017, raising tensions with Washington and sparking fears of a possible military flare-up that could awaken the Korean Peninsula’s slumbering conflict. A prolific proliferator, the North has attempted to send missiles and related tech to countries around the world, from Africa to the Middle East to South Asia, though many of these shipments have been intercepted.

According to the report, the North began testing the new solid-propellant Pukkuksong-2 MRBM, a medium-range ballistic missile, in February. Deploying solid-fuel missiles allows Pyongyang to adjust the location of launchers and avoid the costly fueling times associated with liquid-fueled launchers, increasing the difficulty of any potential preemptive strikes by the United States or South Korea. The North has also carried out five nuclear tests since 2006, the latest back in September 2016.

Given the current trajectory of missile technology, the Pentagon still has a lot of work to do. But as U.S. military planners look to develop a missile defense system capable of defending against even the most state-of-the-art weaponry, they would would be wise to remember that, on the battlefield, a stronger shield will always engender a sharper sword.