US Missile Defense Test Fails, Showing It’s Still Hard To Hit A Bullet With A Bullet 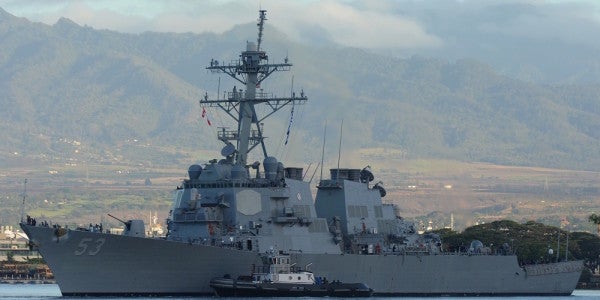 The test near Hawaii involved the new Standard Missile-3 (SM-3) Block IIA missile, a joint project between the U.S. Missile Defense Agency and the Japanese Defense Ministry. While radar aboard the USS John Paul Jones was able to detect and track the incoming medium-range ballistic target missile and fire off a guided intercepting missile, the system failed on the only part of the exercise that really matters: the actual intercept. Essentially, we whiffed.

The test marked the fourth for the SM-3 Block IIA, a missile designed to knock down medium and intermediate-range ballistic missiles. So far, developers on the project are one for two in actual intercept tests, with a successful knock-down carried out back in February. If and when the new interceptor missile clears the testing and development phase, it is slated to be incorporated in the Navy’s Aegis Ballistic Missile Defense System.

It’s still unclear what exactly went wrong with the latest test. In a statement following the failure, the Missile Defense Agency said “program officials will conduct an extensive analysis of the test data. Until that review is complete, no additional details will be available.” When contacted by email, MDA Public Affairs Director Chris Johnson referred Task & Purpose to the agency’s statement.

The failure comes as the United States and its allies seek a workable counter to North Korea’s growing nuclear threat. Led by the impeccably coiffed Kim Jong Un, the North has carried out 10 missile tests since the beginning of 2017, increasing tensions with Washington and raising fears about a possible flare up on the volatile Korean Peninsula.

The Aegis system is already an essential piece of the United States’ ballistic missile defense. The Navy operates more than 80 guided-missile cruisers and destroyers with Aegis onboard, and several naval ships from two key Asian allies, South Korea and Japan, also boast the system. Able to track up to 100 missiles at the same time, Aegis has also performed much better than the Ground-based Midcourse Defense System, which, despite a successful test on May 30, has a success rate of just over 50 percent.

Obviously neither system has proven to be foolproof, and there’s clearly still work to be done. But, given the North’s incendiary rhetoric and nuclear aspirations, let’s hope both continue to improve, so we don’t have to look to the diplomatic skills of Dennis Rodman to save us from a possible collision with Pyongyang.