The Hawaii Emergency Management Agency worker who triggered panic by sending a false ballistic missile alert to phones across the... 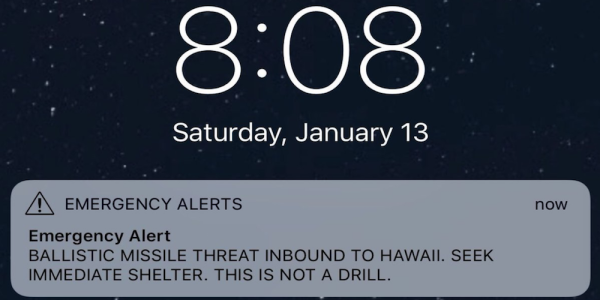 The Hawaii Emergency Management Agency worker who triggered panic by sending a false ballistic missile alert to phones across the state on Jan. 13 believed the state was actually under attack, according to a preliminary investigation released today by the Federal Communications Commission.

Gov. David Ige and HI-EMA officials, in several public explanations on the false alarm, have never revealed that the agency “warning officer” actually thought a missile attack was imminent, instead saying that he pushed the “wrong button” or selected the wrong option from a drop-down computer menu.

FCC Chairman Ajit Pai and staff discussed the Jan. 13 event in a preliminary report during this morning’s commission meeting in Washington, D.C. While a final report has yet to be issued, their initial probe has revealed that poor planning, inadequate technology and a series of errors from multiple people contributed to and exacerbated the button pusher’s mistake.

According to the FCC findings presented in Washington today, a shift supervisor initiated a drill of the missile alert system by pretending to be U.S. Pacific Command and played a recorded message over the phone.

The male warning officer, HI-EMA officials revealed last week, is not cooperating with either the FCC or internal investigations into the Jan. 13 event.

Pai said in a statement, “In my view, here are the two most troubling things that our investigation has found so far: (1) Hawaii’s Emergency Management Agency didn’t have reasonable safeguards in place to prevent human error from resulting in the transmission of a false alert; and (2) Hawaii’s Emergency Management Agency didn’t have a plan for what to do if a false alert was transmitted.”

“Every state and local government that originates alerts needs to learn from these mistakes,” Pai continued. “Each should ensure that it has adequate safeguards in place to prevent the transmission of false alerts, and each should have a plan in place for how to immediately correct a false alert.”

“The public needs to be able to trust that when the government issues an emergency alert, it is indeed a credible alert. Otherwise, people won’t take alerts seriously and respond appropriately when a real emergency strikes and lives are on the line,” Pai said.

Pai and FCC staff discussed the Jan. 13 event and the preliminary report during this morning’s open commission meeting in Washington. While a final report has yet to be issued, so far, their probe has revealed that poor planning, inadequate technology and a series of errors from multiple people contributed to and exacerbated the button pusher’s mistake.

The FCC said it was pleased that the agency already has taken steps to ensure that a similar incident never happens again, but said “there is more work to be done.”

At today’s hearing in Washington, FCC Commissioner Mignon Clyburn said the false ballistic missile alert in Hawaii should be a “wake up call for all stakeholders involved in emergency communications.”

“We cannot simply dismiss this as being an inadvertent mistake that only public officials and Hawaii need to address,” Clyburn said. “This incident should serve as a catalyst to review their emergency alert process. Every community should be doing more to prevent an issuance of a false alert.”

Clyburn said if and when a false alert is ever sent again, “the technical capability to immediately send a correction should be in place and the protocols on how to go about that should be clearly defined.”