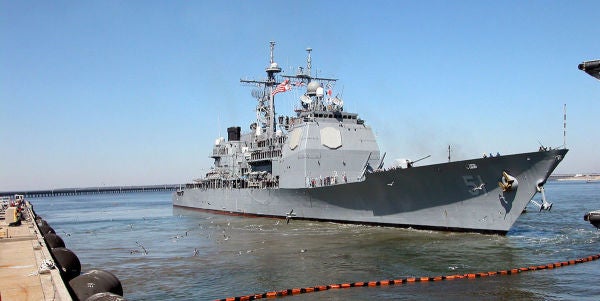 The USS Thomas S. Gates, a U.S. Navy cruiser, steamed along the western Caribbean Sea on March 19, 2004, in the middle of conducting counter-narcotic operations when orders came down from the U.S. Southern Command’s Joint Interagency Task Force.

The Gates was to shadow the Celebrity Summit cruise liner, establish communications with its commanding officer, then apprehend José Miguel Battle Jr., who was sleeping aboard the ship.

Battle Jr., the son of CIA-trained Cuban exile José Miguel Battle Sr., ran La Corporación, a powerful criminal organization in cahoots with the Italian mob. The elder Battle was a former police officer under deposed dictator Fulgencio Batista and was a part of 2506 Brigade that participated in the failed Bay of Pigs Invasion. Following his capture and subsequent release by Fidel Castro’s men, Battle Sr. entered organized crime and built a syndicate from illegal gambling operations known as bolitas, or little balls, which are essentially numbers games.

Starting in the 1960s until the Battles’ capture in 2004, La Corporación grew into more than a $1 billion enterprise. They started in New York and New Jersey, then later expanded to Miami. Under Battle Sr., according to court documents, La Coporación frequently used intimidation, contract murders, and arson, which on one occasion killed a 4-year-old child and a 19-year-old caretaker in a New York City fire in 1984, according to the New York Times.

As his father declined in health, Battle Jr. took over the business, but eventually both Battles were caught and convicted of their crimes. While the senior Battle died in prison later that year, his son was formally released from custody in Miami on Nov. 13, 2017, and is now under the federal probation program, ostensibly a free man, after serving time for racketeering charges.

Years after the fateful arrest, I recalled the small role I played capturing Battle Jr. As a sonar technician, my job was to watch what’s underneath the surface of the water, not the other way around. Toward the end of the operation, I stood watch at the stacks in sonar control with one primary objective: Keep an eye out for any surprise submarine contacts, but none came. But there were three people aboard the Gates that day who played crucial roles in getting Battle Jr. — Senior chief petty officers Joe Christian (now retired) and Jeffrey Fischer and retired Navy Capt. Richard Rainer — who I interviewed for my story. Here’s how it really went down.

The team was briefed in the wardroom before 6 p.m., shortly after evening chow. But he, and others in the response boat, didn't know that Battle Jr. was the leader of one of the most powerful criminal organizations in the United States at the time.

As the search-and-rescue swimmer, Fischer was a part of the Gates boarding team. Aboard the ship were members of Coast Guard Law Enforcement Detachment 101.

It was a hurry-up-and-wait situation, since it took no more than 30 minutes to properly man the boat deck and then wait hours for the go-ahead when the liner reached international waters.

According to upcoming book by T.J. English, the Pentagon and the chairman of the Celebrity Cruise Lines arranged a rendezvous point for the two ships to meet. Time was of the essence, according to English, since the arrest of the senior Battle had occurred a day earlier and his son surely would’ve learned of his father’s arrest.

The team had 12 hours to detain Battle Jr. before the cruise ship returned to Costa Rica territorial waters. Fischer figured they were detaining a powerful cartel drug lord. He knew what they were doing was dangerous, but he wasn’t too scared. Each member of the Gates team carried an M9 Beretta .9mm pistol, while Fischer recalls the LEDET team was armed with M4 carbines.

It was roughly five nautical miles across the water before the RHIB, which carried a boarding team of 16 or so people, pulled alongside the cruise liner in the dead of night, at approximately 2 a.m. At least six members of the Coast Guard law enforcement detachment, clad in tactical gear and face masks, made their way up the ladder, then disappeared into the liner. Minutes later, Battle Jr. was in custody.

“There were no guns a-blazing,” Fischer recalled. “It was late because we wanted to do it under cover so the family wasn't traumatized.” The crime boss was pulled out of his suite, where he was sleeping with his wife and two children, and then taxied back to the waiting cruiser.

When they reached the cruiser, Rainer climbed down the Jacob's ladder to the RHIB. Someone yelled, “Attention on deck!” and everyone jumped to attention, including Battle.

“To my dying day I will never forget this big, bad mafioso character standing at attention when I entered the RHIB,” Rainer told me.

Battle Jr. entered the armory wearing a tank top and pajamas, and everyone who handled him had their name tags covered up with duct tape, per the captain’s standing orders.

“He seemed kind of like a deer in the headlights,” Christian told me. He and several more chiefs were put in charge of watching over the prisoner around the clock until the ship's arrival at Guantánamo Bay, where U.S. marshals were waiting. “They literally gave him enough rope to go to the bathroom and that's it.”

Once at Gitmo, Rainer believes Battle Jr. was taken into custody by agents from the U.S. Marshals Service, which denied a request for Battle’s booking photo. Through his trial attorney, Joel Kaplan, Battle Jr. refused multiple interview requests. The Coast Guard didn’t make anyone available for this story.

David Minsky is a freelance journalist based in California’s Central Coast. He is a former sonar technician and a Operation Enduring Freedom and Operation Iraqi Freedom veteran. You can reach him at minskyda@gmail.com. Follow David on Twitter and Instagram at @daveminsky.

CORRECTION: This article previously said the Hollywood movie starring Benicio Del Toro would hopefully premiere before the end of 2018, but it will not be released by then. (Updated 2/6/2018; 1:50 pm EST)