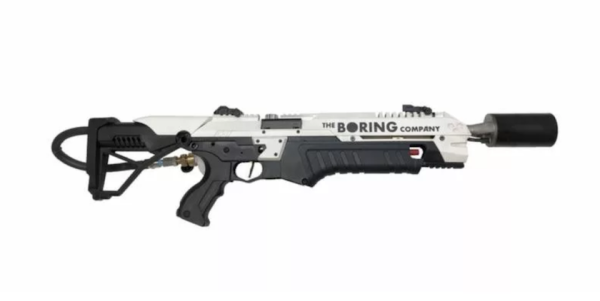 Billionaire brainiac Elon Musk has a pretty grim view of the future. If climate change doesn’t destroy human civilization, artificial intelligence will. That’s why he’s on a mission to get people off this planet and up into outer space as fast as possible.

But what about those of us who can’t afford a one-way ticket to Mars? How will we defend our families from the marauding hordes of bloodthirsty cannibals? How will we survive the robot wars? Don’t worry. Musk’s got us covered, too.

Turns out, the Tesla CEO was deadly serious when he announced on Twitter in December that if he sold 50,000 hats emblazoned with the logo for his infrastructure and tunneling business, The Boring Company, he’d start selling flamethrowers. It was a very unusual tweet — especially coming from one of the wealthiest and most unfunniest people in the world. “I know it’s a little off-brand,” Musk quipped, “but kids love it.”

After 50k hats, we will start selling The Boring Company flamethrower

He was right. It took only two weeks for The Boring Company to sell all 50,000 of those shitty hats. And the man kept his word. Now, for the very reasonable price of $600, you can add The Boring Company Flamethrower to your post-apocalyptic arsenal — just be sure to place your order before the nuclear holocaust. (Hurry!)

Well, not so fast. There is one catch. As a man who clearly values brains over brawns, Musk wasn’t about to just let people purchase his flamethrower without first proving that they can be trusted with all that awesome power. According to The Verge, some Elon Musk groupies on Reddit discovered that if you typed the URL boringcompany.com/flamethrower into the internet, it would redirect you to a page with a password box, and that’s it. No clues.

According to a Redditor who figured out the password (“flame”), which has since been changed, he or she was redirected to another page where they had the option to pre-order Musk’s flamethrower. “Prototype pictured above,” the listing apparently read. “Final production flamethrower will be better.” The Redditor also claimed the page said the flamethrower will start shipping in April.

Despite its name, Musk’s flamethrower appears to do all of the things that normal, non-boring flamethrowers do, like roast people alive and burn villages to the ground. A musician named D.A. Wallach even got to play with the prototype during a recent trip through Musk’s underground lair and posted a video of it on Instagram. Check it out: